A few years ago I proudly lost almost 15% of my weight. However last week I stared with disbelief at my scale as I realised all my efforts were in vain and I had regained all of the previously lost weight.

This got me thinking about the mechanisms that underpin such dramatic fluctuations in weight (sometimes known as yo-yo dieting) and the defences the body uses for weight maintenance.

Even losing as little as 5% of our body weight has a myriad of health benefits, including reduced risk of heart attacks, lower blood pressure, improved glucose control in patients with diabetes, improved mental health and reduced risk of osteoarthritis and certain cancers.

Thus one would imagine the body would generally be supportive of weight loss. If so, why is persistent weight loss and weight maintenance so difficult?

Why the body fights weight loss

The control of weight is based on the balance between calorie consumption and the energy spent during our day to day living. The brain’s weight control centre is in an area called the hypothalamus.

The hypothalamus integrates the incoming signals from the body (such as hormonal signals) and other parts of the brain and then controls weight by affecting hunger and satiety.

It also communicates with other parts of the brain that control metabolism (such as the pituitary gland and sympathetic nervous systems). This complicated and fine-tuned system determines a “weight set-point” which is the weight the body is accustomed to and then works to defend it by fine tuning our metabolism and our calorie consumption.

Energy consumption is divided into the resting metabolic rate (about 70% of all energy used), the energy consumed in processing the food we eat (thermogenic metabolism) and exercise based energy expenditure.

A few studies have outlined the result of moderate weight loss. The body defends against weight loss by drastically reducing the energy expenditure. The body also goes into a sort of “starvation mode” to protect against lean body weight loss by preferentially depleting different energy stores including glycogen, fat and then eventually muscle.

The body spends a large percentage of energy in the maintenance of organ function, even when asleep. In obese people, the resting metabolic rate significantly increases, perhaps to try to prevent further weight gain. Unfortunately, when you lose weight, the opposite happens and the body’s metabolism turns right down.

This may occur through reductions in the active thyroid hormone (T3) and changes in the hormonal messages back to the brain promoting hunger.

A key finding in the above studies is the reduction in resting metabolic rate is disproportionately large, and potentially persists for long periods. This explains why a return to a pre-weight loss lifestyle inevitably results in weight re-gain, and possibly more than was lost.

Only by maintaining a healthy lifestyle with calorie restriction of around 25% and exercise can we avoid the inevitable. The reduction in resting metabolic rate may be particularly problematic in people with severe obesity.

This led me to examine the published data on contestants with severe obesity in The Biggest Loser. I wondered what had become of the contestants who had lost amazing amounts of weight over a relatively short period of time. 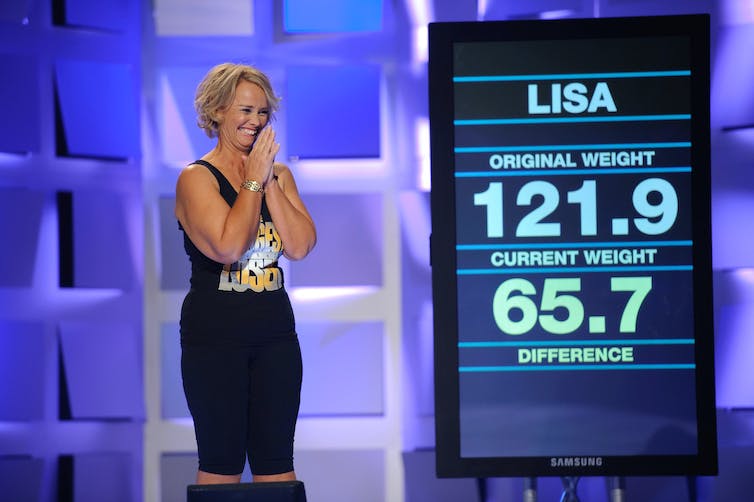 One study confirmed that despite the rigorous exercise programs, the drop in resting metabolic rate persisted. In a study published this year that followed 14 of the original 16 contestants, the majority had regained a significant proportion of the weight loss. More importantly, their resting metabolic rate was still low, almost six years after the end of the show. This suggests the metabolic adaptation against rapid weight loss may be profound and sustained, possibly explaining why we potentially regain even more weight than we originally lost.

This same phenomenon was found after weight loss following a type of bariatric surgery, where weight loss is achieved by reducing the size of the stomach with a gastric band. The metabolic adaptation in these patients was very similar to that found with similar weight loss in The Biggest Loser.

The long-term data for bariatric surgery in terms of sustainability of weight loss suggests other factors (most likely related to gut hormones such as ghrelin) must be influencing energy balance as there is evidence that weight loss is maintained even after many years.

How to avoid the slowed metabolism

So is there a way to counter nature’s opposition to weight loss? Certain types of exercise such as strength exercises preserve muscle mass and this assists in preserving the resting metabolic rate. However it doesn’t always work.

Thus it may be that only sustained modest exercise and a permanent reduction in calories are both essential for weight loss and maintenance. Although there is no data on the rate of weight loss at which metabolic adaptation occurs, most guidelines recommend gradual and steady weight loss of between 0.5-1kg per week, as part of a sustainable lifestyle change which includes appropriate exercise activity and a balanced nutritious diet.