When it comes to an athlete’s weight, a few grams can make a vital difference to their chances of winning. In some sports, an athlete’s body mass puts them within a strictly defined weight classification. In combat sports such as boxing and mixed martial arts (MMA), this is done to match participants to equal competitors in terms of size, strength and agility and make sure winning comes down to skill (as much as is possible).

But athletes in these sports often try to compete in a weight class lower than that of their usual body mass to give them an advantage over people who are naturally smaller. This is often achieved using rapid weight-loss methods to reach a low-enough weight the day (24–36 hours) before competition when the weigh-in takes place. Although the practice of “making weight” is culturally accepted within these sports, it has become notorious from the point of view of evidence-based sports nutrition.

Scientists at Liverpool John Moores University have now raised concerns about this practice in MMA (also known as cage fighting) emphasising that the practice is carried out unsupervised and can be dangerous. They recently surveyed 30 UK MMA athletes across a range of weight classes and found the fighters lost around 9% of body mass in the week before competition and about a further 5% in the final 24 hours before weigh-in.

The effect was achieved by a range of methods to reduce the total amount of water in the body (hypo-hydration), including diuretics to encourage urination, nutritional supplements and low-carbohydrate diets. Alarmingly, 67% of athletes engaged in a practice known as “water-loading” which is sometimes referred to anecdotally as “overdosing” on water. The belief is that drinking too much will lead to excessive urination and so actually remove additional body water.

Overconsumption of fluids has been linked with something called hyponatraemic encephalopathy. This is a condition where excessive water results in dilution of blood and a low sodium concentration. This in turn can lead to brain dysfunction, coma and death. Sports scientists have drawn attention to this danger for some time, although usually related to athletes who drink excessive volumes of water and sports drinks before, during and after endurance running.

The incidence of hyponatraemia in these cases was thought to be relatively low, although more recent research identified the problem in 15% to 30% of endurance athletes at the end of a race, Luckily, the majority of cases weren’t serious. But the prevalence of this condition following “water loading” in MMA is entirely unknown. 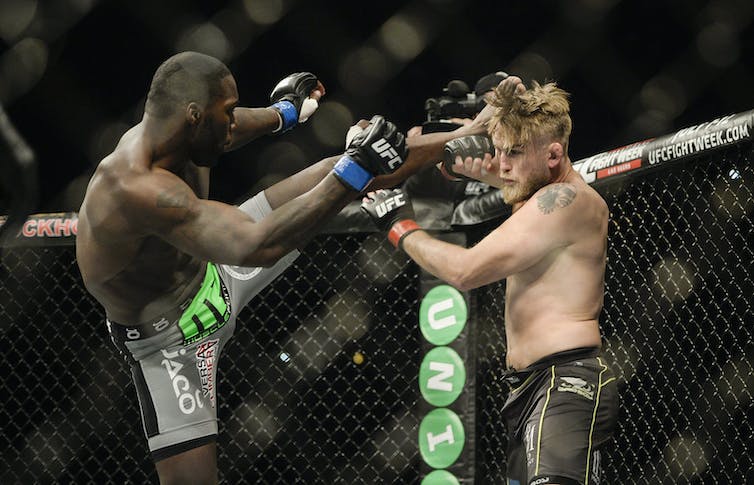 Without further research, we should regard the practice of MMA fighters drinking large volumes of water in the belief it will assist with making weight as dangerous. Life as we know it requires three things: building blocks (chemical molecules), an energy source (the sun via food) and a medium in which life can play out (water). To manipulate the latter in such an extreme manner may be unwise indeed.

A recent review of available research found rapid weight loss was associated with many detrimental consequences in combat sports such as judo, jujitsu, taekwondo, karate, wrestling and boxing. Although there is a general dearth of research relating to combat sports, including mixed martial arts, the review found rapid weight loss was practised by between 50% and 100% in the groups studied.

The results suggested there was a potential impact on physical and cognitive capacities, such as decreased memory, concentration and glycogen (carbohydrate) availability as well as increased fatigue and impaired thermoregulation. Due to the adverse effects of rapid weight loss there are also rare cases of death related to this practice linked with, for example, hyperthermia and dehydration.

In 1996, Chung Se-hoon, a South Korean gold medal hopeful in judo, died of a heart attack in a sauna after reportedly attempting an excessive weight loss programme to lose 8kg (18lb). More recently, in September 2013, Brazilian MMA athlete Leandro Souza died in a sauna after attempting rapid weight loss. He had reportedly taken diuretic pills to try to lose 15kg (33lb) in one week.

There is also a concern, although not strongly evidence-based, that athletes who weight cycle during their competitive careers are more likely to become overweight or obese later in life and die earlier as a result. This is possibly due to alterations in resting metabolic rate and binge eating, although the evidence isn’t clear.

Presumably the competitive benefits of rapid weight loss appear to outweigh the detrimental effects on physical and psychological performance for the athletes who practice it. But given the growing popularity and broadcast coverage of mixed martial arts, the dangers of rapid weight loss need more serious consideration.