Based on evidence that portion sizes have been growing since the 1970s, some researchers have speculated that this is the cause for obesity’s increasing prevalence. But correlation doesn’t equal causation. Since the 1970s, our lifestyles have also become very much more sedentary. The rise in obesity is probably a function of what we eat as well as how active we are.

Coca-Cola, for instanceadded a 250-millilitre can to its range last year and already has 200mL mini-can multipacks. But smaller portions and multipacks are distinct packaging formats with subtle but important effects.

A number of other food companies have introduced large packs partitioned into multiple, smaller “snack-size” packs. The presumption is that partitioning a larger portion into smaller portions will encourage people to eat less in line with the portion-size effect.

In 2008, two independent research teams showed that when participants in lab studies were provided with multiple packs of M&Ms or cookies or chips, people who identified as diet-conscious tended to eat more than people presented with the same quantity in one single, unpartitioned pack. 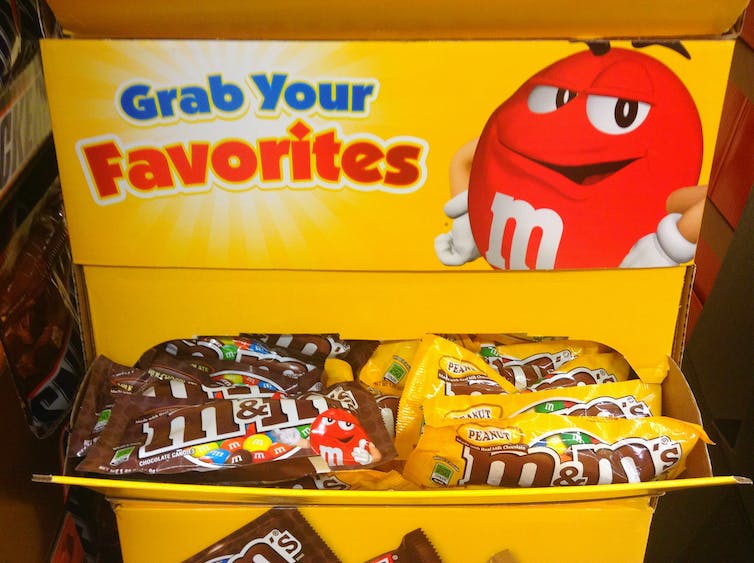 Mind what you eat

But does the effect work beyond the artificial setting of the laboratory? One striking feature of all the studies showing this contradictory partitioning effect was that participants were blind to the fact that their food consumption was being monitored. They were actively engaged in another study (completing a questionnaire, or evaluating advertisements), with the snacks being offered as an incidental treat.

To examine the importance of participant awareness, we did another study examining an additional sample of diet-conscious participants who were explicitly told they would have to provide an evaluation of the snacks afterwards. They no longer ate more.

Smaller portions do appear to help reduce consumption, but people who are diet-conscious, those who are watchful of their weight and what they eat, ought to be careful about multipacks containing multiple smaller portions. This packaging format seems to encourage them to eat more.

The effect of multipacks fits with other research showing the way food is presented can unconsciously affect consumption. If you serve the same amount of food on a small plate, for instance, it may look bigger and lead people to eat less. And tall, thin glasses look bigger than small, squat ones with an equivalent volume; they encourage people to serve and drink less.

The key is to trick the mind into eating less. As eating behaviour scientist Brian Wansink says in his book, Mindless Eating:

The best diet is one you don’t know you’re on.

If you are diet-conscious and intending to buy snacks, you’re better off buying large, unpartitioned packages, or a single small pack. But the best option would be not to buy the snacks at all.