There are many different ways which people try to lose weight. After a long day in the office some people manage to drag themselves to the gym and squeeze in that all-important cardio session. Others may regularly find themselves forgoing the gym to head home and relax. And there are a huge range of diet plans, many of which require significant effort to change your daily routine and eating habits. But what if there was a way to change your attitude to food from the comfort of your living room sofa?

Researchers from the University of Exeter have developed a simple computer game that aims to help people to control their snacking impulses and lose weight. They trialled the game with adults who had a body-mass index that indicated that they were overweight and/or who reported unhealthy snacking habits. The intervention lasted for one week and participants completed up to four training sessions using the online computer game.

The game works by asking people to avoid pressing on pictures of certain images (including calorie-dense foods such as biscuits), whilst responding to other images (including healthy foods such as fruit, and unrelated items such as clothes). The online training lasts for just 10 minutes and is designed to be easily managed in everyday life.

The game is based on the “go/no-go” principle in psychology. Players are led to associate the “go” category of healthy foods with motor impulses, the signals the nervous system use to tell our muscles to move (in this case using our arm and hand to press a button). The “no-go” (stop) category of high-calorie foods is linked to the desire to withhold motor responses (in this case not pressing the button). 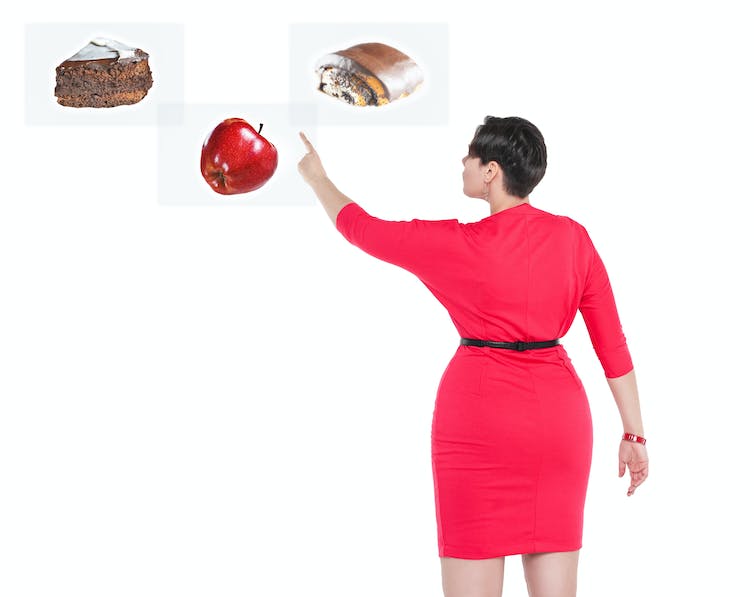 Repeating this process is designed to lead players to associate high-calorie foods with stopping motor activity. In other words, the idea is that when trained individuals see unhealthy foods they will no longer feel the ingrained need to reach for them. They may even no longer associate such foods with a feeling of reward.

To test the effectiveness of the game, researchers asked 41 participants to spend 10 minutes playing it on four occasions in one week. Players were also weighed and asked to complete food rating tasks and food diaries one week before and one week after the training. A follow-up was also made six months after training.

Another 42 volunteers formed a “control” group that was asked to play a similar game that only featured non-food objects. Those playing the food game lost an average of 0.7kg during the training week and consumed an average of around 220 fewer calories per day – while the control group on average gained weight. The active group also reported liking the unhealthy snack foods they were trained to stop reaching for less than they had when they started. And the further weight loss they self-reported six months later indicates the training effects may persist over longer periods.

Cognitive brain-training apps that promise to easily improve our intellect or change our behaviour have become a multi-million pound business in recent years. Companies such as Nintendo and Luminosity have developed a wide range of user-friendly neuroscientific puzzles. These apps typically aim to provide a mental workout and often promise to improve memory, IQ or cognitive abilities such as spatial awareness or verbal reasoning. Brain training apps have even become associated with the ability to delay the onset of dementia.

In reality, the scientific proof for these grand claims is fairly limited. A 2010 study reported that individuals actually get better at the specific tasks set in the brain training games through familiarity, but showed no overall improvement in memory or general IQ.

The activities in brain training apps usually take up mere minutes of your long day. Is this really enough time to counteract a lifetime of bad habits, or even our very regular exposure to advertisements endorsing all things unhealthy? Intelligence and behaviours such as eating habits are developed over our entire lifetime. It is possible to form new neural pathways in the brain representing new patterns of thought or behaviour. But for us to favour these over long-establishedpathways we will likely need much more effort than that required to play a ten-minute computer game every day.

Exeter’s research shows such brain training techniques show promise in helping people control problematic and undesirable behaviour like overeating. Other recent research suggests similar internet-based “go/no-go” tasks can be particularly helpful in training those most vulnerable to overeating. Plus, the fact that such games can fit easily into our often busy daily lifestyles suggest it might be easier to convince people to use them than traditional diets.

But despite the success of these efforts, we should regard the results of this research with some caution. There is no quick-fix solution to losing weight. It is likely that the participants who volunteered to enter these studies were already motivated individuals with an existing desire to change their eating habits. That means that this kind of brain-training game may have less success with those are unconcerned with or unwilling to change their diets in the first place.