A 21-year-old university student has died after taking a chemical she bought over the internet as a way to lose weight.

Sadly Eloise Aimee Parry was the latest of a string of young people to fall victim to the chemical 2,4-dinitrophenol, known as DNP. It is a very dangerous chemical and scientists have been aware of this for nearly a century.

During World War I, DNP was sometimes used to fill armour-piercing shells, as a mixture with picric acid, known as Shellite or Tridite. An explosion in a munitions factory at Rainham in Essex in 1916 was attributed to the chemical.

Just like TNT it was found to be toxic to the munitions workers handling it. Many of them lost weight dramatically and some even died simply by absorbing it through their skin. The commercial use of DNP is as a pesticide or herbicide and, in 2009, 11 workers in a Chinese chemical factory – plus nine of their relatives – contracted DNP poisoning, their skins turned yellow or even black and two died.

After World War I, scientists at Stanford University investigated DNP to see if it was a useful slimming aid. They established that the chemical boosted metabolism by up to 50%, leading to considerable weight loss without dieting. However, they also found out that there were a number of side effects (including cataracts) and that the safety margin was too slim.

Firms started selling it direct to customers which meant that people were taking it without medical supervision – and fatalities resulted. When one man died, they measured his temperature – it was 110°F (43°C). DNP was banned in the United States under the Food, Drug, and Cosmetic Act of 1938; the US Food and Drug Administration said that DNP was too toxic to be used under any circumstance.

DNP went underground for years, but it was again marketed in the 1980s as a “weight-loss without dieting” drug – and, more recently, the internet has given it a wider circulation, describing it as a “safe weight-loss drug”. Anything but. Extravagant claims were made by people who said that they lost 20 pounds in 12 days by taking it; it was promoted as “the king of the fat-loss drugs”. And of course the health problems and fatalities associated with its use returned.

Not for human consumption

How DNP works was discovered in 1948. The chemical helps to move protons across membranes in cells, resulting in a reduction in the production of ATP (adenosine triphosphate, the molecule that transports energy within cells, the body’s “energy currency”). This means that much of the energy usually generated in respiration is instead wasted as heat (which can lead to fatal hyperthermia). The body compensates by speeding up metabolism in order to produce the energy needed to maintain the body. This increase in metabolic rate results in the consumption of fat and carbohydrate as they are turned into energy. 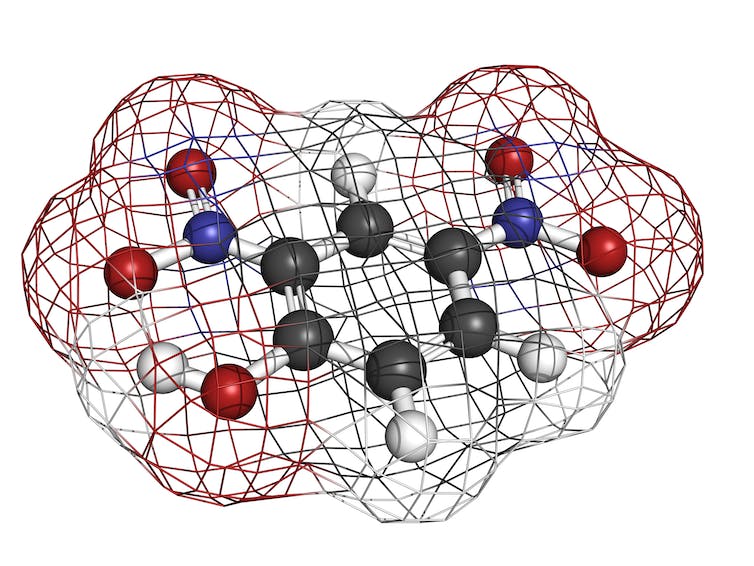 The people marketing it may hedge around with labels saying “not for human consumption”, but obviously consumers do not get the guidance that would be given if they were getting a medication from their doctor. A 27 year-old woman who wanted to lose weight bought some over the internet; she wanted faster results so she took double the recommended dose. It killed her.

There have been a number of fatalities in the UK caused by DNP. In 2013, an 18-year-old rugby player named Chris Mapletoft died after taking DNP. The preceding year a 28-year old High Wycombe bodybuilder, Sean Cleathero, died after his temperature rose to 42°C when he consumed DNP at his gym. That same year a 23-year-old Leeds University medical student, Sarah Houston, died after consuming DNP that she’d bought over the internet. Her father said:

For those who are selling it, if you have any ounce of decency, you must stop.

In 2004 the UK Food Standards Agency advised consumers not to take any product containing DNP at any level: “This chemical is not suitable for human consumption.”

All sorts of promises are made on the internet about DNP. But if something sounds too good to be true, then it probably isn’t. In the case of 2,4-dinitrophenol, it’s also deadly.