Researchers have been telling us for decades that being overweight is not good for our health. Medical journals are full of articles that link overweight and obesity to just about every disease and illness in existence, including mental health problems.

Not only that, but in my field of the developmental origins of health and disease, we’ve linked obesity in one generation to multiple problems in the next.

Excess weight and obesity place huge cost pressures on Australia’s health system. In 2005 this cost was estimated at A$21bn … annually. And there are plenty of other social and economic costs involved with being overweight, especially given the marginalisation of obese people in our society.

As scientists, we believe that knowledge is power. So surely, the knowledge of how bad being overweight and obese is for our health, and the knowledge of the enormous social and economic costs, is all we need to start reducing our waistlines, right?

Wrong. Rates of overweight and obesity in Australia are increasing and the trend is predicted to continue. By 2025 an estimated one in three children will be overweight or obese. Overweight could in fact be the “new normal” for future generations.

Let’s consider the barriers to this knowledge actually leading to change.

Psychological influences on weight problems are extremely important, but are often overlooked in favour of dietary changes. But negative self-perception and attitudes towards eating play an important role in the development and maintenance of obesity. 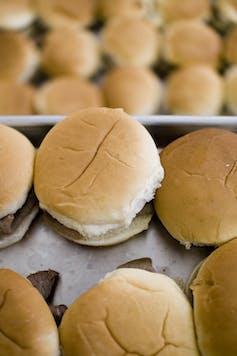 For people who are overweight and obese, being told in so many different ways that big is bad doesn’t encourage a healthy self perception. And society tends to have negative views of being overweight, associating it with laziness or unattractiveness.

Psychologists know that when an individual has a low sense of self-worth or feels disempowered, they are not only vulnerable to mental health problems, but their self-efficacy, which is their belief in their ability to change, is challenged. So the information not only makes people feel bad, it also limits their ability to make changes towards achieving a healthy weight.

Plus there are a myriad of attitudinal influences on weight maintenance that knowledge alone can’t always shift. If, like me, you grew up in 1980s when Bob Geldof and Band Aid were crooning about famine in Africa, you probably heard the phrase “Don’t you know there are starving children in Ethiopia?” whenever you attempted to leave the dinner table without finishing everything on your plate. This is one simple example of how early lessons about food can play into later weight problems: wasting food is associated with guilt, so food must be eaten.

Another example is viewing food as a source of comfort. If you tell someone who uses food to soothe their emotions that they can’t eat that comfort food anymore, it leaves an emotional void that needs to be replaced by something else if weight loss is to be successful.

So if knowledge doesn’t work, what does?

Psychological weight-loss strategies that address the thinking and behaviour behind overweight and obesity tend to be far more successful than trying to target diet alone. But each weight management group might comprise eight to ten people, and there are around 300 million people worldwide who are obese. What we need is a population approach.

In the same week Disney detailed plans to restrict advertising on its children’s television channels for food products that don’t conform to strict nutritional guidelines.

I don’t like the idea of bans per se, but these initiatives have the potential to change the culture around our consumption of foods that contribute to weight problems from an early age. They challenge the “normality” of eating unhealthy foods by limiting their availability and promotion.

But perhaps the most effective solution would be to prevent obesity from conception. Ensuring the optimal pregnancy environment to encourage a birth weight within the normal range is thought to reduce the risk of obesity later in life, when compared with low and high birth-weight babies. Support for mothers, particularly those living in social disadvantage, can help introduce positive nutrition practices right from the very start of life.

Focusing our attention on early life is resource effective in the long term, and prevents the establishment of food choices and behaviours that lead to life-long obesity. Prevention is the pathway from knowledge to change.