Welcome to part seven of The science behind weight loss, a Conversation series in which we separate the myths about dieting from the realities of exercise and nutrition. Here, health sociologist Rhian Parker, from the Australian National University, looks cosmetic surgery as a tool for rapid weight loss:

The number of cosmetic surgery procedures in the United States rose by 155% in the five years to 2010, with liposuction coming in as one of the top five most popular procedures. Data on cosmetic surgery uptake in Australia isn’t available but it’s likely to have a similar appeal here. 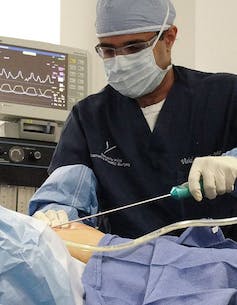 Liposuction, also known as lipoplasty, involves the insertion of a cannula (a long tube) under the skin, where it is moved around to break up deposits of fat, which are then suctioned out. It’s an invasive process, with the surgeon moving the cannula vigorously to break up the fat and bodily fluid.

Cosmetic surgeons usually recommended liposuction be performed on healthy people who have small amounts of fat they want removed from particular parts of the body such as the thighs, buttocks and abdomen. A more extreme form of liposuction, mega liposuction, removes large amounts of fat over a number of sessions.

Recovery, which takes up to ten days, can be painful, with substantial bruising and swelling occurring around the site. Results of the liposuction may not be obvious for up to six weeks.

Those who elect to undergo liposuction can expect to pay anything from $3,000 to around $8,000.

As with any surgical procedure, liposuction has a number of risks, the most serious of which is death.

Many procedures are performed under local anaesthetic, sometimes with sedation, but the sensation of the cannula being forced under the skin and into the fatty layers can be very uncomfortable. For this reason, many patients opt for a more risky general anaesthetic.

There are also risks with the injection of fluids into the site of the liposuction to help break down and aspirate the fat. If too much fluid is used, the heart can be inundated with the volume and can literally drown. Patients are also risk infection and embolism (blockage of the artery).

A common side-effect of liposuction is the oozing of fluids from the treated area. One woman who had undergone liposuction described this as feeling “like a sieve … I was oozing watered-down blood … through the bandages”. 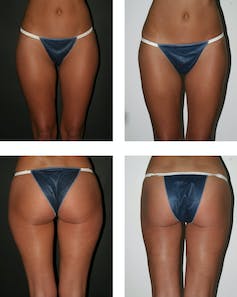 There is also the risk of a poor outcomes. Many women aren’t told, or don’t understand they may not get their desired outcome from the procedure. Fat can be removed unevenly, giving a bumpy appearance, or it may not be feasible to remove enough fat to make a visible difference.

Unfortunately we don’t have any evidence to show the long-term impact of liposuction on the body. Nor do we know how many people return for numerous liposuction procedures.

But weight loss is both a physical and psychological process, and if liposuction is being used as an alternative to lifestyle and dietary modification, the effects will likely be short term.

Cosmetic surgery is primarily a commercial endeavour and this intersection of medicine and the market is ethically problematic.

The use of cosmetic surgery for weight loss isa buyer’s market, where practitioners actively seek patients to treat. Their work is not predicated on reducing the incidence of disease or on improving public health. Instead, it is based on the anxiety that patients feel about their bodies.

Surgeons stimulate demand through advertisments in magazines and online. These often promise to boost self-esteem and make women feel good about their bodies.

Many also provide information about securing loans to pay for cosmetic procedures, should cash not be readily available. 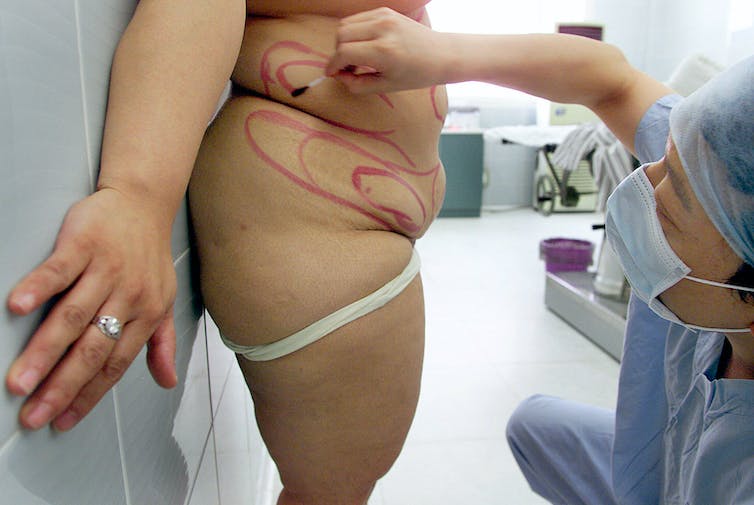 Liposuction, as with most cosmetic surgery, is a gendered practice, with women of all ages seeking surgical solutions to be at ease with how they look.

Many women try hard to lose weight, and may succeed, but hate the look of their thighs, saddlebags or stomach. Women who have had children often want their old shape back and may resort to liposuction to achieve this. Other women feel that all diets have failed and liposuction is their last resort.

We shouldn’t deny people the choice of what to do with their body but we need to question why so many Australians are paying doctors to carry out risky procedures, the long term effects of which are unknown.

Cosmetic surgeons’ promises that imperfect bodies can be improved through a straightforward and seamless process masks the reality of what is an invasive, and often painful, surgical procedure.

This is the seventh part of our series The science behind weight loss. To read the other instalments, follow the links below: