Home DNA testing is all the rage right now, but largely in the field of researching your ancestry. However DNA ancestry tests pale in comparison to the real use for gene analysis. A much more useful application is helping you understand your body. This is both for health reasons –  you can be warned of things that could go wrong with your body, and take steps to minimise those risks – and also for fitness and weight management. That’s because DNA testing can give insights into how your body responds to food and exercise.

People naturally have many concerns about this area, from privacy to potentially discovering some very hard truths about themselves. However Rightangled, a new health and fitness DNA testing service, seems to be going about things in the right way. Rightangled has funding from the NHS, a range of back-up services – they don’t just send you a chart saying ‘you are at risk of diabetes’ and then leave you to get on with it – and a comprehensive data protection and privacy policy. I tried it out and discovered some reassuring things, some slightly worrying ones, and a number of insights that made a lot of sense.

Rightangled offers three tests. A standard intolerance test for allergies – boring. However, it also does ‘Fitness DNA’, which assesses how your body reacts to exercise and diet, and what your likely strengths and weaknesses are, and Heart DNA, which looks at your genetic risk of various heart complaints and also how your body is likely to react to certain drugs.

There is also ‘Wellness Pro’, which combines the two DNA tests, which is what I had. 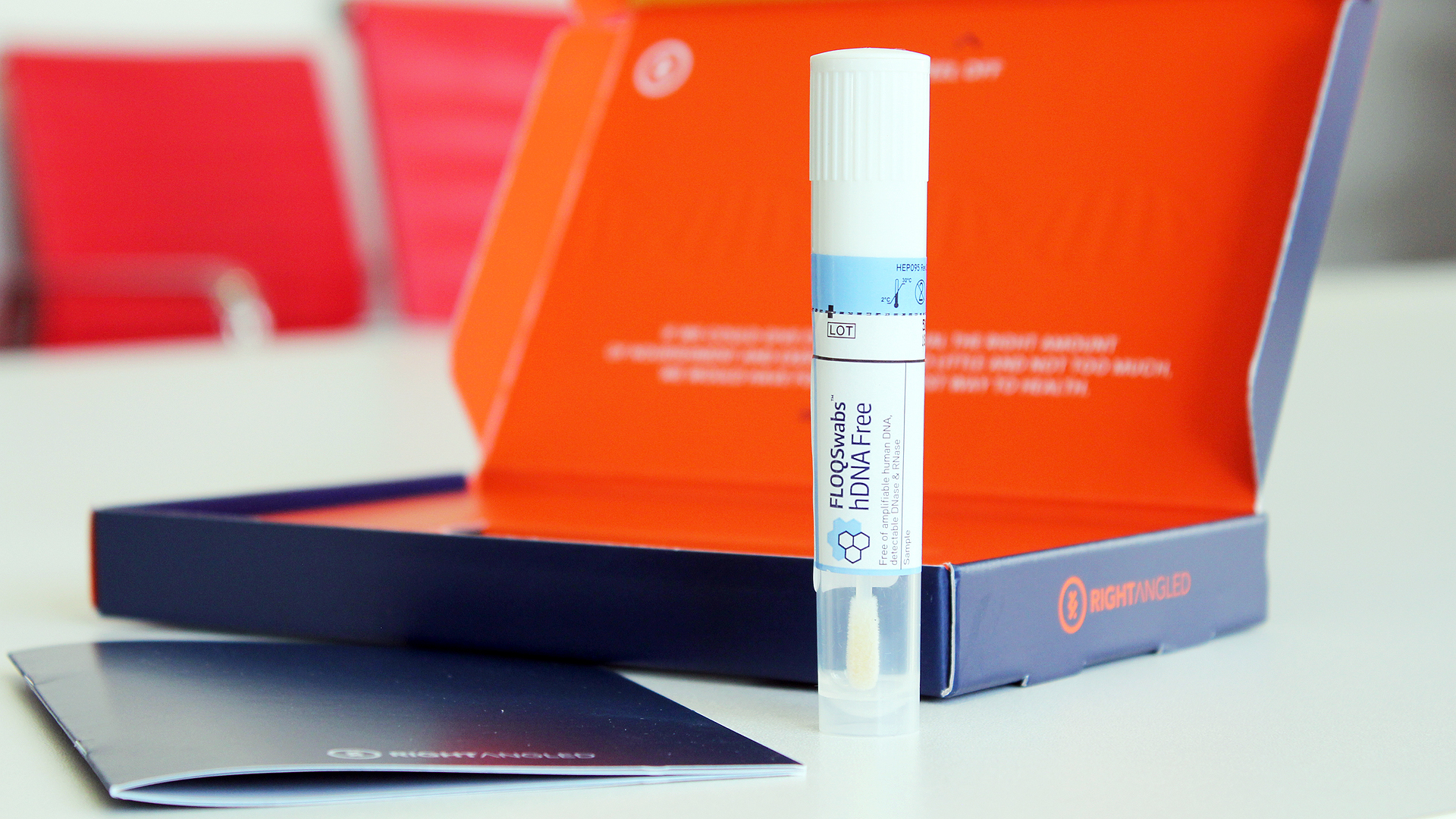 Taking DNA is simple – you just rub a cotton bud around your mouth for a minute, then seal it in a tube and post if off. You also need to fill in a fairly lengthy online questionnaire about your lifestyle and health/fitness goals. Rightangled then runs its tests, passes the results to its experts who compile reports on what your DNA test tells them, and the results and reports wind up online, accessible only by you.

The reports are from a qualified personal trainer for Fitness DNA and a doctor for Heart.

In my case, the doctor was at pains to explain that any increased risk of heart disease and so on due to my DNA meant there was a chance, not a certainty of it. This is an element of understanding DNA testing that a lot of people struggle with.

Once these reports have been sent to you, your data is anonymised, ie: the results are kept but there is nothing to link them to you. If you have a read of Rightangled’s privacy and data protection policies, it should reassure you, which is obviously very important.

If I have one major criticism of Rightangled, it is the way it presents its downloadable reports. You can view the same info online in a much more serious format but for whatever reason, it has chosen to make the downloadable version look like this: 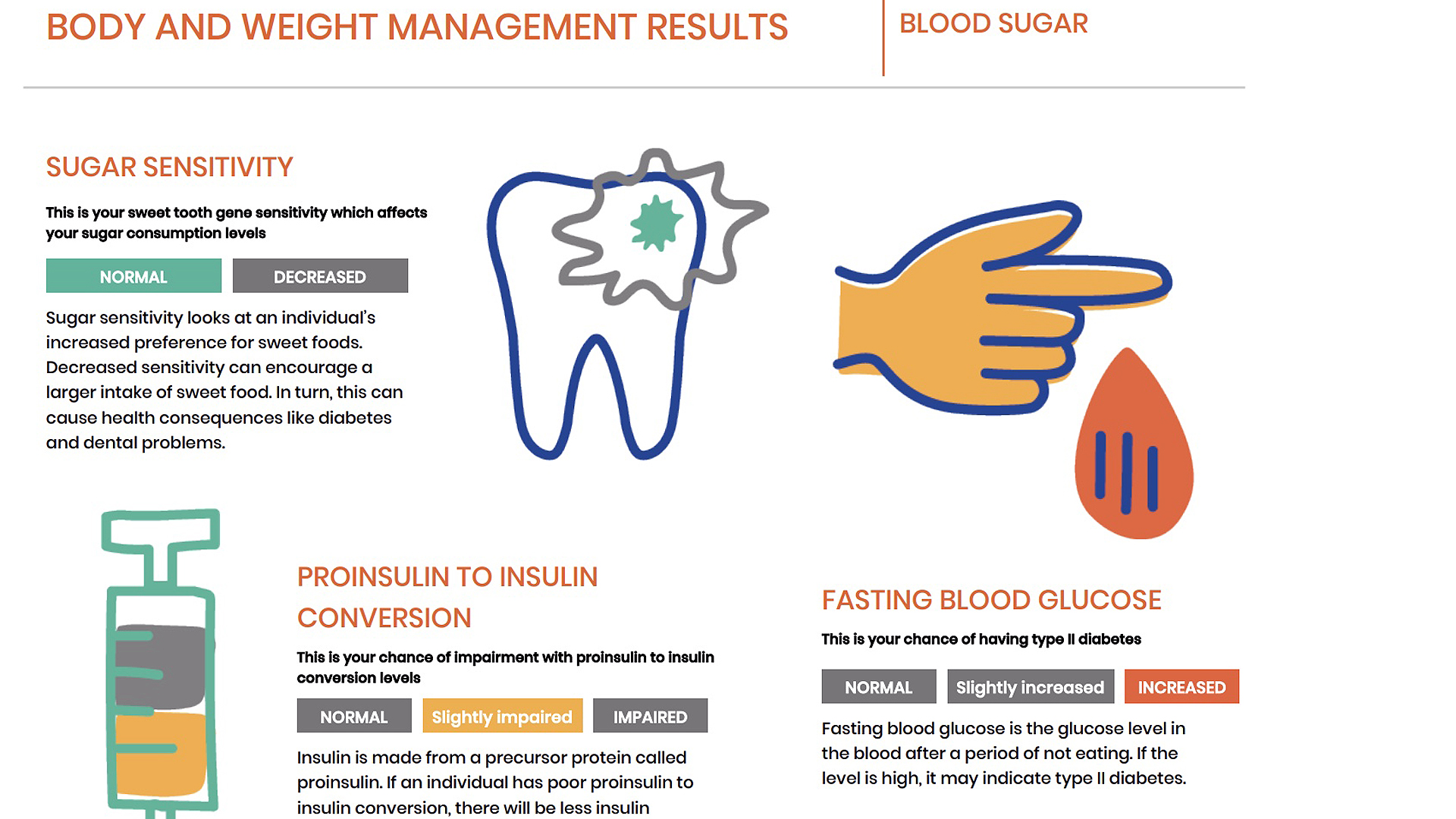 The above information is actually telling me I have a slightly raised genetic risk of diabetes. I’m relaxed about that; my lifestyle is generally pretty healthy, which should mean that risk doesn’t translate to actual illness. However, I would really rather have that kind of info presented in a more serious, less visually shitty way. As I say, the online version is much cleaner and more scientific.

That aside, I found Rightangled’s insights really interesting and the personal trainer’s report very useful in places. For instance, I tend to eat one large meal per day, late in the evening. The rationale for this being that I like eating but don’t want to get fat, so get most of my daily calories from one large meal of extra-yummy food.

However, the test results suggest this isn’t only my choice, it’s also something I’m genetically predisposed to, because I have a low ‘food pleasure’ response – ie: the food needs to be really tasty and in quite large portions; my DNA doesn’t let me feel satisfied just by eating some porridge or a bit of kale. Apparently I would be much better off eating more and smaller meals, so that’s something I’ll try to take on board.

Because I had said in my questionnaire that I want to build muscle (I don’t, but I was interested to see what Rightangled would come up with) the PT’s report was full of long lists of workouts I should do, many of which sounded like sex positions – Supine Scorpion, Lizard With Rotation, Pigeon Glute Stretch’ etc. It all seemed like sound advice… which I will probably ignore.

The dietary advice, based on sound nutritional principles but also my raised genetic likelihood of diabetes and heart disease, was something I am more likely to make use of. I think my diet and exercise levels are generally fine anyway, but there were lots of useful ideas to take on board. The report was rounded out with some general tips – don’t be sedentary, take 10,000 steps per day, get plenty of sleep – that I think we all already know are important, but which are nonetheless good to be reminded of. 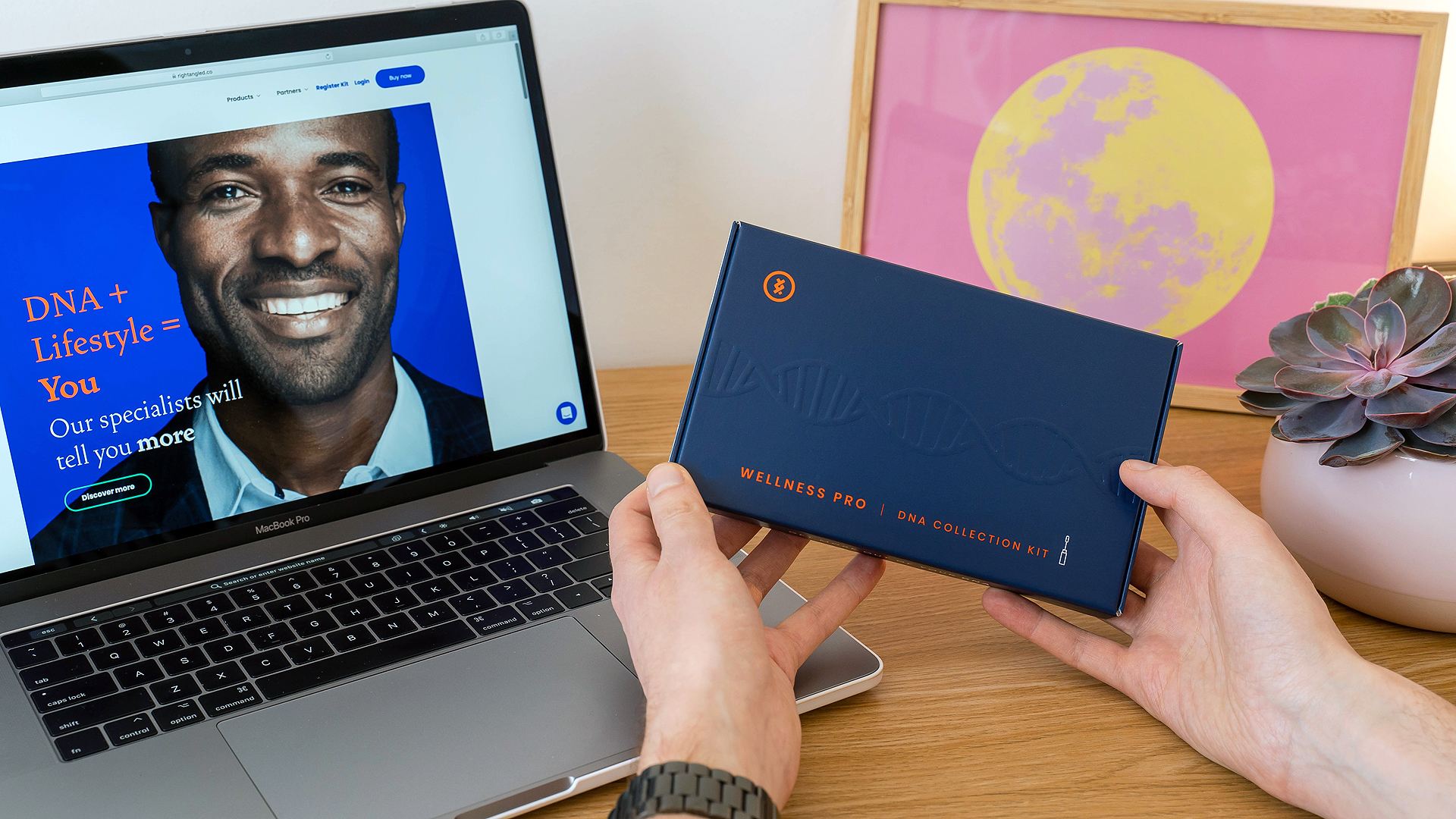 Overall, I was really impressed with Rightangled. It offered some slightly worrying news about potential health risks but also explained that these risks could be reduced, and gave what I thought seemed like pretty sound advice on how to do so. The advice on how to improve my fitness and get totally buff also seemed very sound, even though I will probably not be following it.

Rightangled’s reports do throw a lot of information at you, and they are probably not for people seeking basic reassurance. It’s not some sort of magic bullet that will make you the healthiest and fittest you can be, without any effort on your part being required. For those who want to make informed decisions about their health and fitness and are willing to put in the necessary work, I do recommend giving it a go. There are some genetic insights to be had here that are way more profound than discovering your ancestors were Vikings.