Unless you’ve been living under a rock for the past few years – or a large pile of gravel, perhaps – you might have noticed gravel bikes are cycling’s ‘next big thing’. In fact, they are ‘today’s big thing’ – almost every brand on the planet has launched a gravel bike, leaving cyclists either wondering what the hell they are all about or reaching furiously for their wallets. But the first question to answer is, of, course, what is the best gravel bike?

Whether you want a rough-and-ready commuting bike with fat tyres to bulldoze through potholes, or a machine ready to load with bike-packing bags for a round-the-world trip, gravel bikes are built to handle almost anything and we have the best of the best gravel bikes for you here…

Buying a gravel bike: what you need to know

The term ‘gravel bike’ came out of the US, where there’s an expansive network of gravel roads that need something tougher than a road bike but not as aggressive as a mountain bike. Really, it’s a catch-all term – these bikes are ultimately designed to offer maximum versatility.

But with a drop-handlebar and knobbly tyres, isn’t a gravel bike just a rebranded cyclo-cross bike? No: gravel bikes are far more versatile than their CX brethren, and also open up a whole new world of riding compared to a traditional road bike with skinny tyres. If you could only own one bike (perish the thought!), chances are it would be a gravel bike.

But that’s enough of that. What do you need to consider when buying a gravel bike? And what are the best gravel bikes money can buy? Read on.

Gravel bike frames are normally made from aluminium, steel or carbon fibre, although you can also find machines crafted from titanium. Aluminium is the most affordable frame material and well-suited to the demands of riding over rugged terrain, while carbon fibre bikes will be the lightest and, in the majority of cases, most expensive.

There are typically four features that combine to set a gravel bike apart from a road bike or cyclo-cross bike: geometry, disc brakes, tyre clearance and gearing. Depending on what you want to use the bike for, you should also look out for additional features that may further increase its versatility, like rack or mudguard mounts, while some manufacturers have also developed mini-suspension systems to improve comfort.

Let’s start with geometry – in other words, the layout (lengths and angles) of the frame’s tubes. There’s no single blueprint to follow but gravel bikes are designed with versatility at the top of the agenda, so most frames will have a geometry that favours long-distance comfort and off-road stability over race-ready speed and aerodynamics. As a result, you can expect to see a longer wheelbase than a road bike to provide mellower handling over rough terrain.

Cyclo-cross courses normally have lots of tight turns, and that’s reflected in the aggressive geometry of CX race bikes, but gravel bikes will have slacker headtube angles, again to provide more predictable handling. The frame will also put the rider in a more upright position, to cover big miles without needing to see a chiropractor.

Disc brakes are now standard on cyclo-cross bikes, and that’s also increasingly the case on road bikes, but all gravel machines will have discs. They give you more predictable braking performance in all weathers and over all terrains for starters, but disc calipers and rotors also free up much more space for tyre clearance.

And that is one of the key standout features of a gravel bike: plump tyres. You should look for at least 40mm of clearance, with most off-the-shelf bikes specced with tyres that fall somewhere between 30mm and 40mm. Ultimately, you can change the tyres to suit the type of riding you want to do, tweaking the width and tread as appropriate.

Want to use your gravel bike mostly for road use, with the odd tow path, bridleway or forest track thrown in? A 30mm tyre will provide a good balance of speed and versatility. Planning to head off-road or into the wilds? A chunkier tyre with a more aggressive tread pattern will give you more comfort and grip. Many gravel bikes will also accommodate smaller diameter 650b wheels, which boost tyre clearance further.

The gearing on a gravel bike should be more forgiving than a road or cyclo-cross bike to account for the steeper and tougher terrain you’ll find off-road, as well as the fact you may be weighed down by bikepacking bags. Many gravel bikes will be specced with a 1X (read, ‘one-by’) groupset with a single front chainring and wide-ranging rear cassette, while others will use a compact (50-34t) or sub-compact (48-32t) double chainset with two chainrings.

What is the best gravel bike?

Over the past decade, Canyon has forged a reputation for quality road and mountain bikes at wallet-friendly prices and that continues with the German company’s first dedicated gravel bike: the Grail.

The Grail range includes more than ten bikes, made from both aluminium and carbon fibre, but the aluminium Grail AL 7.0 SL is our pick of the bunch, thanks to its competitive price and quality spec.

The best gravel bikes in order 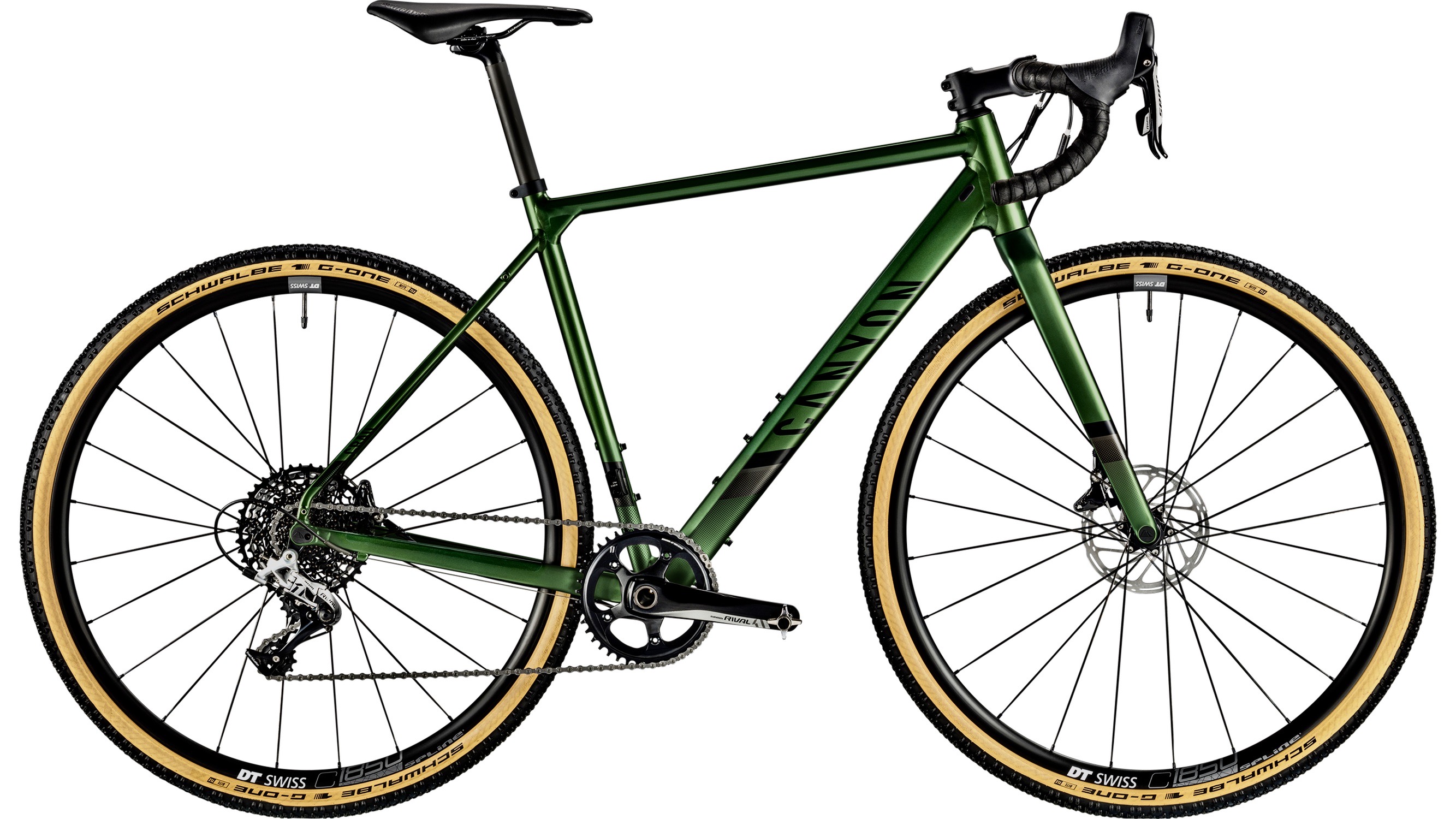 Canyon launched the Grail in 2018 as its first gravel bike – a machine designed to be fast on the road and comfortable off it. The Grail was initially only available as a carbon fibre frame, complete with Canyon’s radical double-decker handlebar, but there’s now also an aluminium chassis with a conventional handlebar.

We’ve chosen the aluminium option here, thanks to its durability for the rough-and-tumble of gravel riding and all-out affordability. This is a bike designed for curious minds, with Canyon also offering a range of bikepacking bags if you want to plan a two-wheeled adventure, but mudguard mounts make it a seriously versatile bike equally at home on the commute to work.

This specific model, the Grail AL 7.0 SL, sits at the top of the aluminium range and sports a SRAM Rival 1 groupset, so a single chainring at the front is paired with a huge, climb-crushing cassette at the rear. That gives you the full spread of gears you need for nailing singletrack descents and scaling off-road climbs.

Other quality components include the 40mm Schwalbe G-One Bite tyres, which come in a tan-wall design sure to get cycling purists salivating. Canyon’s direct-sales model – you buy direct from the German brand’s website, with no bike shop acting as middle-man – makes this a bargain.

Specialized’s Diverge gravel bike stands out from the crowd thanks to its front micro-suspension. The boffins at Specialized have taken the Future Shock design originally found on the Roubaix endurance road bike, which features a comfort-boosting spring inside the headset, and adapted it for off-road use.

The Diverge’s Future Shock design has a stiffer spring to offer more progressive suspension, so the front of the bike shouldn’t bob about like a witch at Halloween when you’re sending it over the rough terrain it was designed for. More comfort and improved control? That’s a win-win.

The Diverge range features both carbon fibre and aluminium models, and we’ve plumbed for the former here. You’ve got clearance for 42mm tyres – the Diverge is specced with 38mm rubber off-the-shelf, which is a fair size for all-round use – and there’s the option to go even wider with 650b wheels (increasing the tyre clearance to 47mm).

Throw in the slick shifting and first-class braking we’ve come to expecting from Shimano’s second-tier Ultegra groupset and you’ve got a seriously capable machine on your hands.

The Cannondale Topstone Apex 1 blurs the line between gravel and mountain bike by including a dropper seatpost. While there’s an argument to be made that a dropper post isn’t necessary on a gravel bike, it does open the Topstone up to the kind of terrain you just wouldn’t take other drop-handlebar whips.

The 40mm-wide tyres help, too, and additional clearance on top of that means there’s room to go bigger still. Plus you’ll still find rack and mudguard mounts for that everyday around-town practicality. By the way, if you don’t want a dropper post, Cannondale offers two other bikes in the Topstone range (and they are cheaper, too).

Cannondale has a well-earned reputation for quality aluminium bikes and the Topstone is based around a metal chassis, with a carbon fibre fork up front. The geometry is more relaxed than the company’s road race bikes to keep you comfortable over long distances and to inspire confidence on bumpy trails.

Whereas the Specialized Diverge aims to take the sting out of rough terrain with its Future Shock front suspension, the Trek Checkpoint takes the opposite approach and focuses on the rear. Trek’s IsoSpeed decoupler isolates the seattube from the toptube to cushion the ride, protecting your rear end in the process.

That’s just one of the smart features on the Checkpoint, which also features a carbon fibre frame (with a protection plate on the downtube to defend against gravel), a Blendr-compatible stem (you can clip your lights directly into the stem, saving space on the handlebar) and Trek’s Stranglehold dropouts, which allow you to tweak the geometry to match your riding style. There’s up to 15mm of adjustability, so you can quicken or relax the handling as you wish.

Mudguard and rack mounts, as well as additional bosses on the fork, toptube and underside of the downtube for extra bottles or luggage, make this a bike with serious versatility. Fit a set of mudguards and use the Checkpoint as a burly, fat-tyred commuter, or go mad with bike-packing bags and head off into the wilderness.

The Italian maestros over at Pinarello are best known for their race bikes – Sir Bradley Wiggins, Chris Froome and Geraint Thomas have all ridden the company’s bikes to victory at the Tour de France – but this is a departure from the norm: a Pinarello gravel bike. And if you needed further evidence that the gravel trend is here to stay, this is it. When a storied brand like Pinarello is getting on board, you know it’s a sure thing.

As we’ve come to expect from Pinarello, the Grevil+ gravel bike is suitably high-end. The frame’s tube profiles have been crafted with aerodynamics in mind (yep, an aero gravel bike) and the grade of carbon fibre is described as ‘the best existing today’. This build comes with smaller diameter 650b wheels wrapped in plump 47mm-wide tyres, while SRAM’s lightweight Force 1 groupset provides the shifting and braking. Of course, all that means you may need to sell a kidney to afford it.

British brand Kinesis has a well-deserved reputation for versatile and dependable bikes, and the Tripster AT only bolsters that. With an aluminium frame and carbon fibre fork, adorned in quality components, this is a machine capable of taking almost anything in its stride.

The Columbus Futura Cross fork is worth pausing on as it features a ‘flip-chip’ to switch the rake of the fork from 47mm and 52mm. Want to use the Tripster AT for blasting around with a grin plastered across your face, hopping from the road to bridleways and back again? Use the 47mm option. Heading onto unknown terrain or loading the frame with bike-packing bags? Lengthen the wheelbase for additional stability. This complete bike features a mix of SRAM Apex and Rival 1 components, with Kinesis wheels, Schwalbe tyres and Ritchey finishing kit.