The best rowing machine may assist you in getting arms like Arnie, thighs like Hoy and cardio prowess to rival Mo. But failing that, they’ll definitely improve your upper body strength and cardiovascular fitness, as well as shift some of that stubborn, unwanted fat that tends to accumulate at this time of year.

• : the best deals with home delivery

Indoor rowing can help you get fit sooner than just diet alone. In fact, very few pieces of fitness kit deliver a workout quite like the not-so-humble rowing machine. If you’ve got the space to stash one at home (or in a garage), it could be your ultimate home gym buddy as you work to get in shape for those sunnier days…

What is the best rowing machine?

I personally believe that if one is going to clutter a room with fitness equipment, it may as well look like a work of art and the eye-wateringly expensive WaterRower Natural rowing machine (it is fashioned from Ash wood, don’t you know) is one of the most handsome pieces of kit on the market.

It’s also one of the most natural experiences around, with a patented WaterFlywheel that utilises the same physical elements (water) and the same physical dynamics (fluid drag) that occur when a boat moves through water.

How to buy the best rowing machine

Once the slightly tricky technique of rowing a machine (or rowing anything, in fact) is mastered, you’ll benefit from an all-over shakedown that targets most of the major muscle groups, as well as sculpting a lean upper body and improving the all-important respiratory system.

Rowers are the machine of choice for cross-fit nuts, Olympic athletes and professional sports stars. If it’s good enough for the fittest folk on earth, it’s perfectly suitable for those who want to tame a beer belly.

A rowing machine is also, perhaps surprisingly, less cumbersome than the likes of a cross-trainer or running machine, with many lightweight models folding flat and/or standing up, for easy storage in cupboards or corners of rooms.

Prices start at around £160 for the more basic magnetic resistance machines and rise to nearly £2,000 for the units that boast all of the bells and whistles.

There are a number of other factors to consider before setting foot in the Rowing Machines R Us, the first being space. Also worthy of thought: how much noise you and your loved ones can put up with and your exercise intensity needs.

Box-fresh oarsfolk will not be able to tell the difference between a machine that uses air resistance and one that favours water or some trick electro-magnetic unit, but these factors will be important to more experienced rowers.

The majority of units tend to favour an air resistance system, which is the tried and tested formula in the mock rowing world but also one of the noisiest.

Water and magnetic resistance technology is much quieter and the former is said to offer the most natural rowing experience.

Those on a really tight budget and with minimal floor space can look to old-school, hydraulic rowers, which use dual handles and hydraulic pistons to replicate resistance. They tend to deliver a less realistic experience and don’t target the spread of muscle groups that the more traditional rail, handle and chain models offer. And for that reason, we’ll focus on those.

The best rowing machines of 2020, in order

Just take a few moments to admire the beauty of the WaterRower. Fashioned from solid ash and stained honey oak, it is designed to resemble the glorious vessels found spearing down the Thames during the Oxford-Cambridge Boat Race.

This is more than just a seductive household ornament, though. This cleverly conceived rower features a decidedly moist flywheel that’s designed to mimic the feeling of gliding across the watery surface.

Rather than the irksome humming of a fan and clanking of a chain, users are greeted to the sound of rushing water with every stroke and the unique resistance mechanism adapts to the user’s input: pull harder and the resistance increases, it’s that simple.

The result is a seriously heart-pounding, all-over workout that targets up to nine muscle groups in one fell swoop.

According to its US maker, every WaterRower Natural frame is hand built using solid ash wood, sustainably sourced from the Appalachians. It is then stained in honey oak and finished with a light Danish oil.

A small S4 Performance Monitor comes with the package and displays distance, stroke rate, workout duration and distance without the need to plug into the mains.

Although not foldable, the relatively clunky 50kg unit does feature guide wheels at the rear and is designed to be stored vertically when not in use, although with a body like that, maybe you’ll want to show if off to house guests.

Like much of the product in Technogym’s latest range, the Skillrow is ridiculously high-tech, offering the user way more than just a platform to idly row in front of 4Music for an hour.

The system uses Multidrive Technology, which basically adds further resistance to the usual air resistance unit, allowing users to switch between training for cardiovascular fitness and back-bulging strength at the twist of a dial.

On top of this, it has some excellent connectivity, including its own clever app that offers a virtual cox to get you through those really punishing sessions. Get a number of Skillrow’s in a room, wheel in a large screen and an entire class can start competing against one another or rowing in total synchronicity for a more entertaining workout. 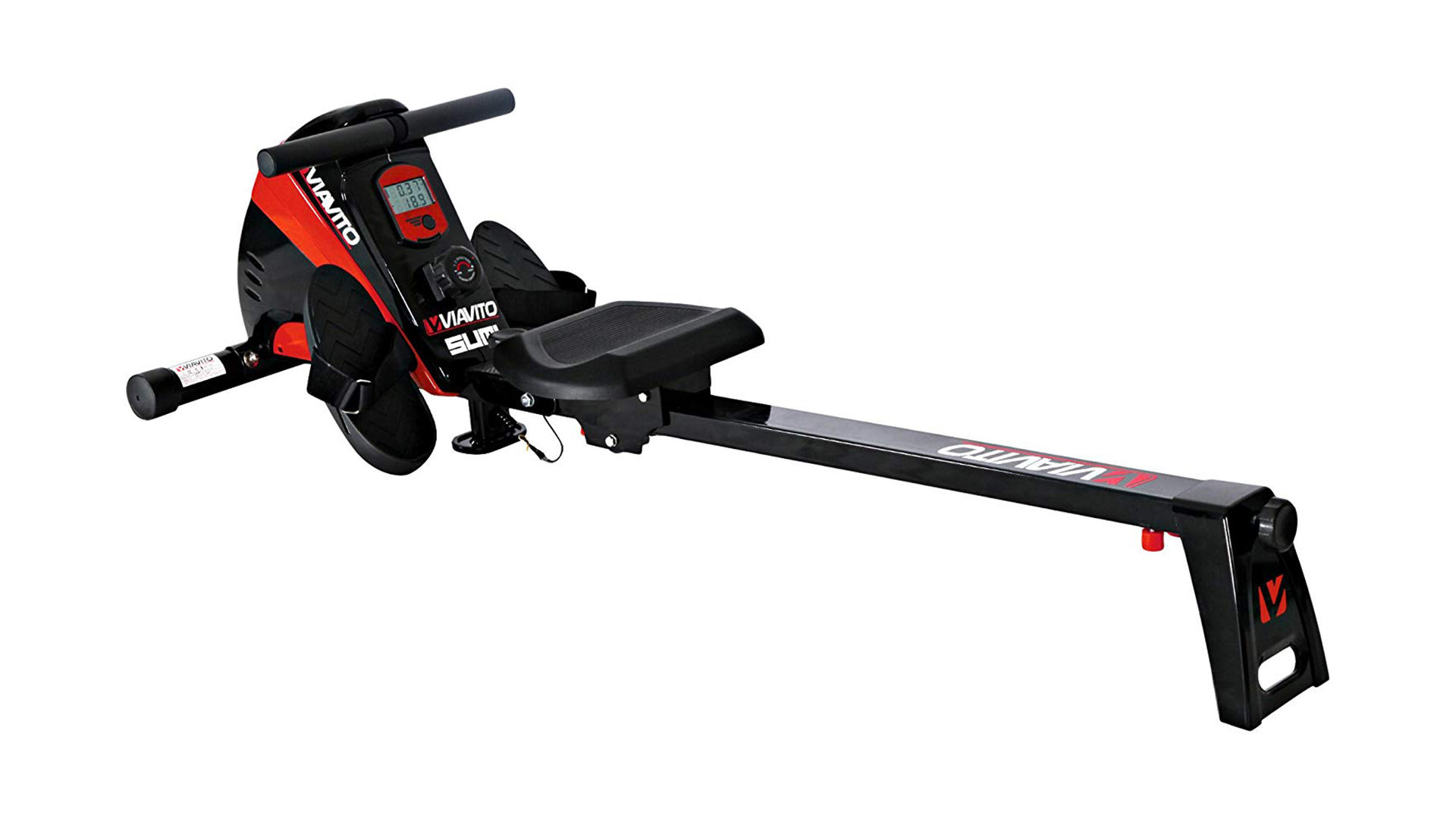 The clever folding mechanism on this reasonable little rowers sees it fold upwards so it can stand on its base and be stashed up against a wall, saving plenty of precious space.

A 7kg flywheel offers what Viavito calls “silent and friction-free” magnetic resistance, but that hushed rowing experience means it doesn’t feel quite as smooth or realistic as the WaterRower or those noisy, air-powered units on this list.

Tall folk might also want to look elsewhere, as this is really only suitable for those measuring 110cm or below, but it offers a good build quality, ten levels of resistance and plenty of vital read-outs from the little digital display. All that for a very reasonable price.

Fresh from the marque’s professional range, the Life Fitness Row GX has been designed and built to withstand the rigours of daily, punishing use.

Much like the previously mentioned WaterRower, this unit uses a similar Fluid Resistance technology to create that natural rowing experience. But here, users can manually adjust the resistance of the water with up to 15 differing levels.

Unlike some gym machines there’s no multimedia compatibility, nor can you download data to smart devices or connect external heart rate monitoring systems, but a small computer does take care of distance, stroke rate and other important pieces of information.

In short, it covers the business of rowing extremely well but those wanting something more technologically advanced should look elsewhere.

Anyone who has set foot inside a gym will have likely spent some time thrashing away on a Concept 2. The ubiquitous machine is the best selling indoor rower in the world and that’s because the hardy air resistance system can handle a pummelling from Olympic athletes.

The included The Performance Monitor 5 provides the brain to match the brawn, allowing you to track data such as distance, speed, pace, calories burned, and watts. There’s also a good choice of pre-set workouts, games and the ability to connect ANT+ and Bluetooth products for wireless heart rate monitoring.

It’s not the most handsome, exciting or quiet rowing machine, but the Concept 2 won’t let you down.

Designed for home use, this 10-setting bad boy might not offer the most natural rowing feeling around, but there is a small, AA battery- powered display that gives boredom busting read outs on speed, time, distance, rpm and an estimated calorie burn.

It folds, it wheels around, it’s not that heavy and it is pitched at a very reasonable price. A top pick for those looking to add a little CV workout to their home routine.

One of the main roadblocks to rowing machine ownership is the floor space these long, skinny apparatuses take up. But not so if said piece of equipment folds in half like a wet napkin.

This NordicTrack offering is arguably the most ‘foldable’ of all the machines mentioned here, with an ability to contort like a Cirque du Soleil gymnast when not in use.

Perhaps not as robust and weighty as the Concept 2 or WaterRower, this space-saving alternative still delivers the goods with ten different resistance settings, a selection of workouts via the digital screen and built-in speakers that will happily accept tunes from a standard 3.5mm jack.

The cheaper end of the rowing machine spectrum is never going to deliver the goods like the really lavish stuff, but this entry-level offering from Marcy is a solid effort for those dipping a toe in home fitness waters for the first time.

The 4kg flywheel and magnetic resistance system boast eight levels of resistance, while the solid aluminium rails and robust seat rollers ensure the rowing movement is smooth and not as noisy as rival air-driven units.

However, those looking for a realistic rowing feel might be a little disappointed and the digital display is basic to say the very least. 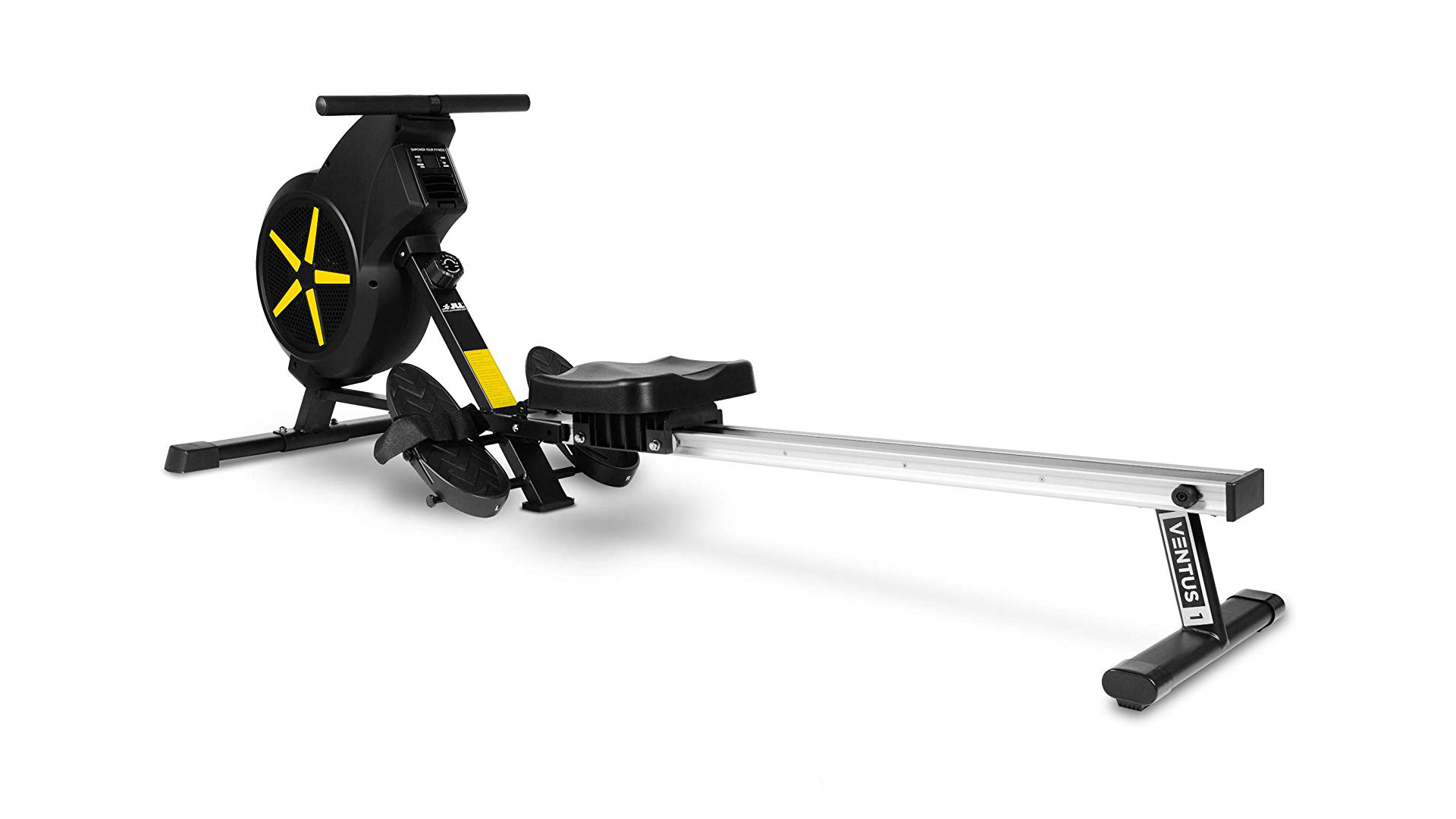 This rower sits very much at the cheaper end of the scale but, unlike lots of rivals in this price bracket, it uses clever magnetic and air resistance technology to not only deliver a more realistic rowing experience but also offer eight different resistance levels.

There’s a very basic LCD monitor that counts calories, reps and time exercising but that’s really where the gizmos end. Instead, this is a well built and affordable rower with a smooth action and the ability to fold and store away when not in use.

So long as you’re not expecting to train for the next Olympic Games on this thing, it will more than suffice as a fat-burning tool. 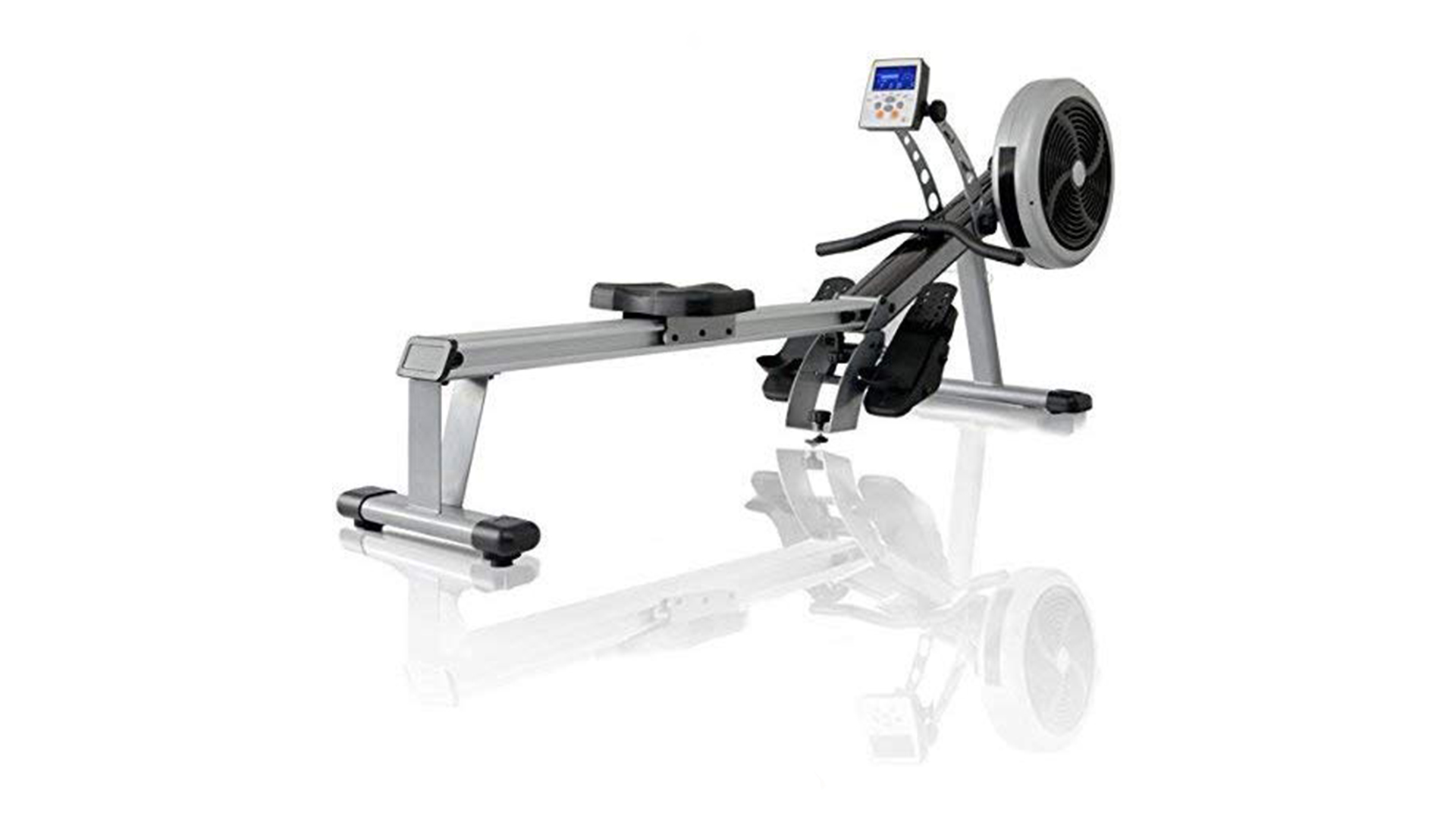 With its aluminium construction and nickel plated steel chain, this feels like a sturdy piece of kit. In fact, it has got one of the highest user maximum weight ratings on this list (130kg, if you’re interested), along with primo features, such as a wide padded seat and adjustable footplates.

A built-in computer offers a plethora of rowing read-outs, while the 16 levels of resistance and multiple training programmes ensure there’s a workout for all abilities.

That said, the overall construction and tough air resistance offered here makes it more suitable for those with a bit of rowing experience, rather than someone new to the business, seeing as it tickles the more premium end of the budget spectrum.