Everyone seems to have a very positive opinion about Mizuno running shoes. Yet, before I wrote up this Mizuno Wave Skyrise review, I haven’t had the chance to try them out. And based on my experience using the Mizuno Wave Skyrise, there is a reason why people love Mizuno.

As much as I love – and use very often still – the beast of a running machine Hoka One One Carbon X, I must admit, its chunky carbon-plated midsole does the work for you. It lands and rolls perfectly, transform landing energy into explosive toe-offs. Running in the Carbon X feels great, but you also feel slightly isolated from the ground; you will run fast but you won’t feel like it’s your achievement only.

Enter the Mizuno Wave Skyrise: the midsole technology used in it might be brand new, yet it delivers an old-school running experience. It doesn’t try to correct the way you place your feet; it doesn’t try to roll for you. No, the Mixuno Wave Skyrise will make landings softer and provide you with more control over what happens in that split second your sole touches the ground.

Wearing the Mizuno Wave Skyrise, you will feel like changing directions often, run more agile and take over that jogger in front of you sooner. I don’t necessarily recommend the Mizuno Wave Skyrise for complete beginners, not because it’s not comfortable, on the contrary. But more experienced runners will benefit way more from the lack of stabilisation and claiming the control back from their shoes. 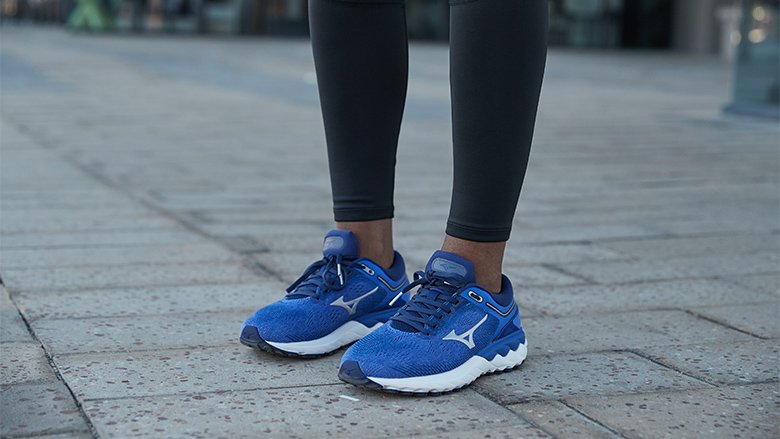 The most notable innovation that went into the Mizuno Wave Skyrise is the new midsole system which combines the Wave Foam technology and the XPOP midsole compound. The latter is basically an insert in the rear of the midsole that “contains thousands of small beads which immediately cushion on impact”.

Imagine something similar to the Nike Joyride Flyknit, but less slumpy. The XPOP box has loads of little beads that rearrange as you land take off. They won’t move completely out of the way as you land – there isn’t enough space for them – but they will move around in a way to better accommodate your heel as it hits the ground.

In the meanwhile, the Wave Foam soleplate consists of “two soft materials placed together in a wave shaped design to create a very cushioned and stable platform”. Of the two, the emphasis is definitely on the cushioned part, and the softer variety.

As for the outsole, the Mizuno Wave Skyrise uses the X-10 carbon rubber – it’s all about carbon in running circles nowadays after all! The X-10 was designed for higher impact areas, like concrete, and is said to provide a better grip.

What I found however that it’s actually a little less grippy on wet surfaces, like when you run over wet leaves on concrete. The shoes grip, but also slide ever so slightly. I didn’t find it to be a major issue; the Mizuno Wave Skyrise provide ample amount of control so a slight deviation from the perfect grip won’t hinder anyone’s running experience. 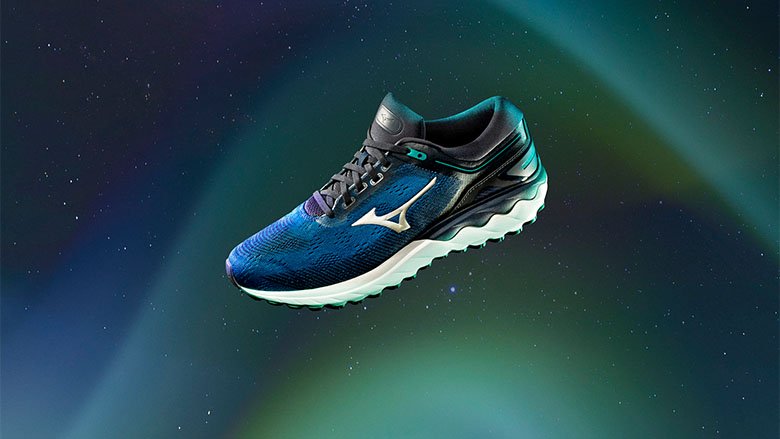 Confession time: I like tight-fitting shoes. Not too tight, tough, I don’t like compromising the integrity of my toenails as I run. But a toebox that’s too roomy or a wider-than-needed heel counter can make you feel like you’re wearing one of your parent’s shoes.

The Dynomotion Fit upper, combined with the Synthetic Overlays, provided a good fit the Mizuno Wave Skyrise was the first shoe in a while that felt roomy but not loose. My personal favourites were the padded tongue and ankle collar, both soft and puffy, reducing chafing and discomfort.

As for the new midsole system, the best way to describe it would be to compare it to thick gym mats; even running on concrete, my soles felt loved and supported. Since the Mizuno Wave Skyrise doesn’t try to correct your gait, running in it feels a little bit like running on the aforementioned gym mats barefooted.

And this feeling of softness didn’t go away, even after ramping up some mileage on the road. Running shoes with a sturdier sole system, like the Asics Metaride, can feel a bit unforgiving as your feet gets tired. Not the Mizuno Wave Skyrise. It remains soft and cushioned all the way through. 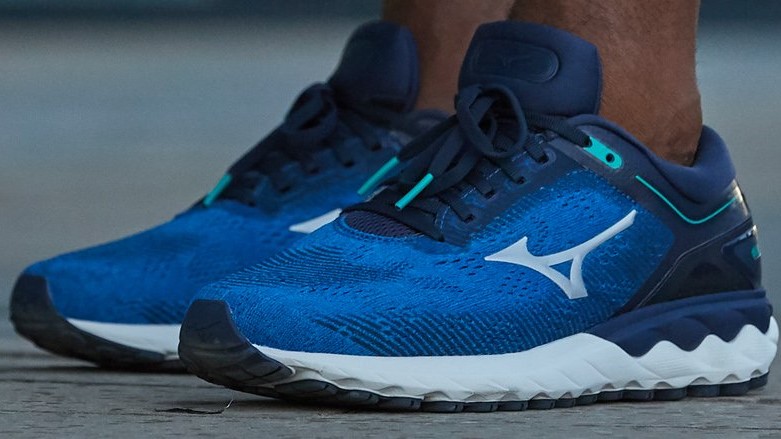 The Mizuno Wave Skyrise lags behind some of the competition in the looks department and this is mainly true for the main blue/silver/navy colourway. It doesn’t look bad but it doesn’t look too exciting either: the outsole has the wavy-pattern at the back and the low cut collar does make the shoe looks sleeker but not rousing enough.

The Mizuno Wave Skyrise looks like a running shoe and it isn’t sorry about it. It’s not a designer trainer that you will pop on for anything else but running. To be fair, I highly doubt that anyone is expecting a Mizuno shoe to looks too sleek, but it’s always a nice surprise when hardcore brands roll out some handsome looking shoes.

A small consolation are the different colourways that actually look slightly different, my personal favourite being the bluebird/black/melon combination. 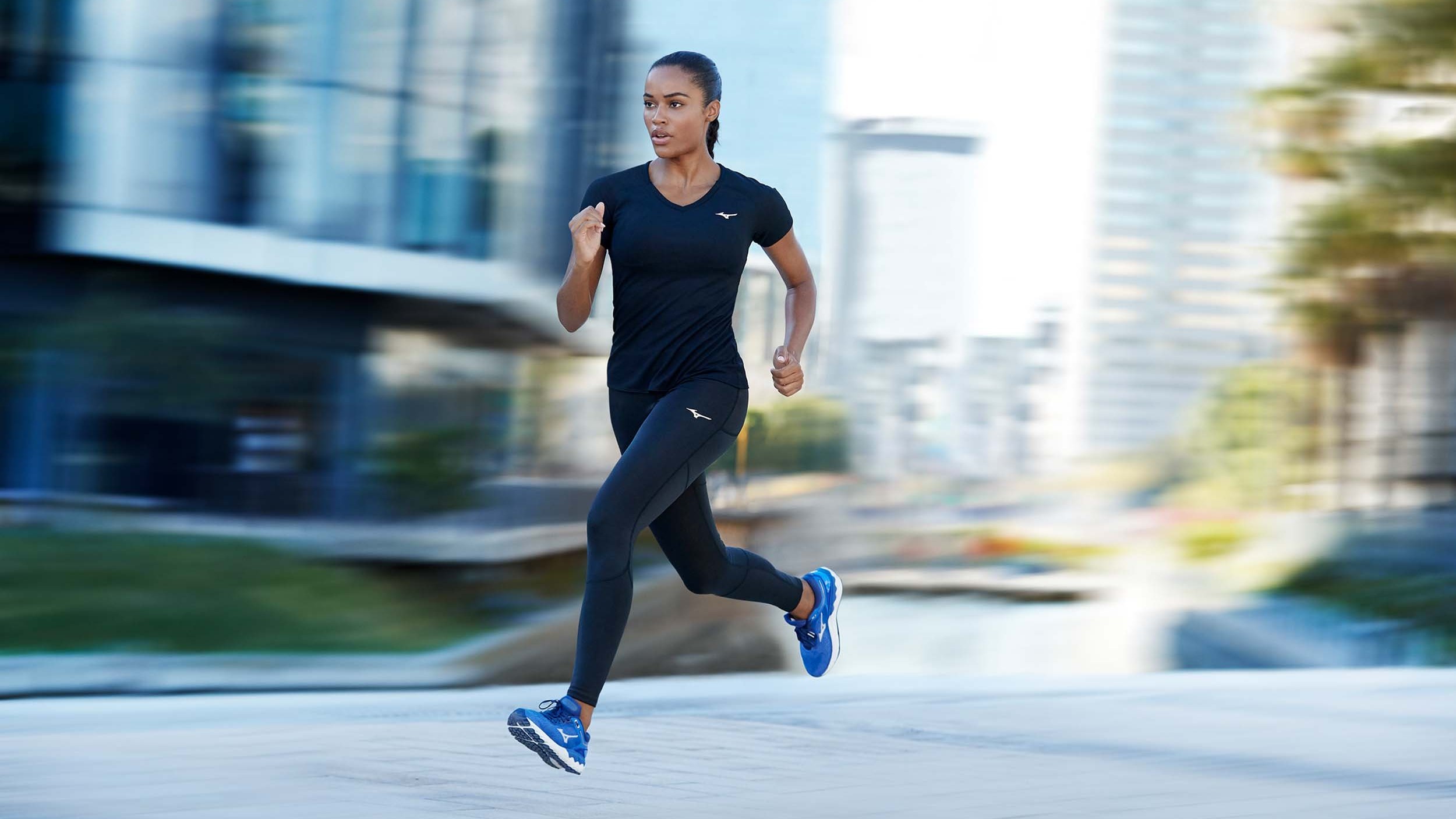 The Mizuno Wave Skyrise delivers a brilliant, old school running experience, concentrating on comfort and control, for everyone who likes going the distance.

The new XPOP technology, combined with the Wave Foam soleplate, delivers a soft and cushioned ride, but one that doesn’t feel slumpy or sluggish. The Dynamic Fit upper hugs your feet and holds it securely, yet gives it enough room to breathe and splay out when needed.

I wish the Mizuno Wave Skyrise looked a bit more exciting: especially the standard navy colourway looks particularly uninteresting. The shoe looks more or less how you’d expect a running shoe to looks like, which will appeal to the majority of people who know the brand already, but probably won’t draw in a new crowd successfully.

And that’s a sad thing, because I believe there are a lot more people who would appreciate the Mizuno Wave Skyrise, should they know about the brand and the running dynamics its shoes offer.

Nevertheless, should you decide to pick up a pair, your feet will thank you for running in the Mizuno Wave Skyrise, especially if you are not a complete novice runner and appreciate a bit more control.