Theragun G3 may look like the world’s most dangerous sex toy, but it’s actually a percussive massager, designed to pummel your muscles into pain-free bliss. It does so by repeatedly blatting your body surface to a depth of 16mm – this, Theragun says, it what differentiates it from other, ostensibly similar massagers. I’ve been using one for several months now and have been pretty damn impressed, but it’s definitely not for everyone.

The Theragun G3 sits in the middle of the current Theragun range and is priced $400 or £375. Above it is the G3Pro which is even more powerful, has a moveable percussive arm – very handy – and a wider range of interchangeable heads. Below it is the Liv, which is cheaper, more portable, less powerful, and aimed more at people who aren’t built like brick outhouses. 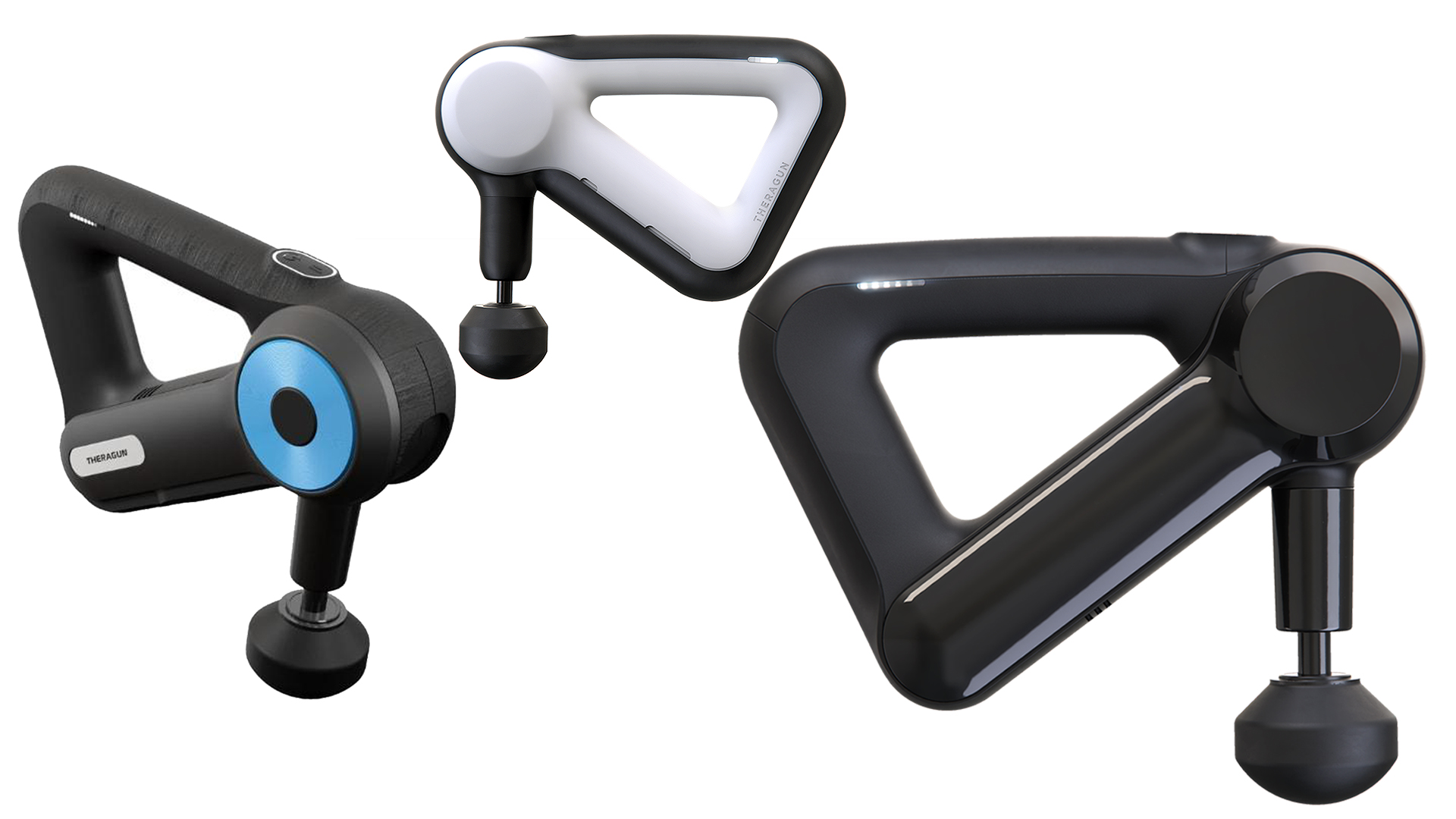 I should kick off this hands-on appraisal by saying that I have no knowledge of any scientific, proven evidence for the efficacy of the Theragun. Whether it has any long-term beneficial effect, I have no idea.

However, it certainly feels effective, and as a great philosopher (or was it Sheryl Crow?) once said, if it makes you happy, it can’t be that bad. Theragun also has demonstrable short-term benefits when it comes to stiffness and discomfort. Although admittedly it achieves that by causing a certain amount of discomfort, because this thing really does pound you, when used properly. 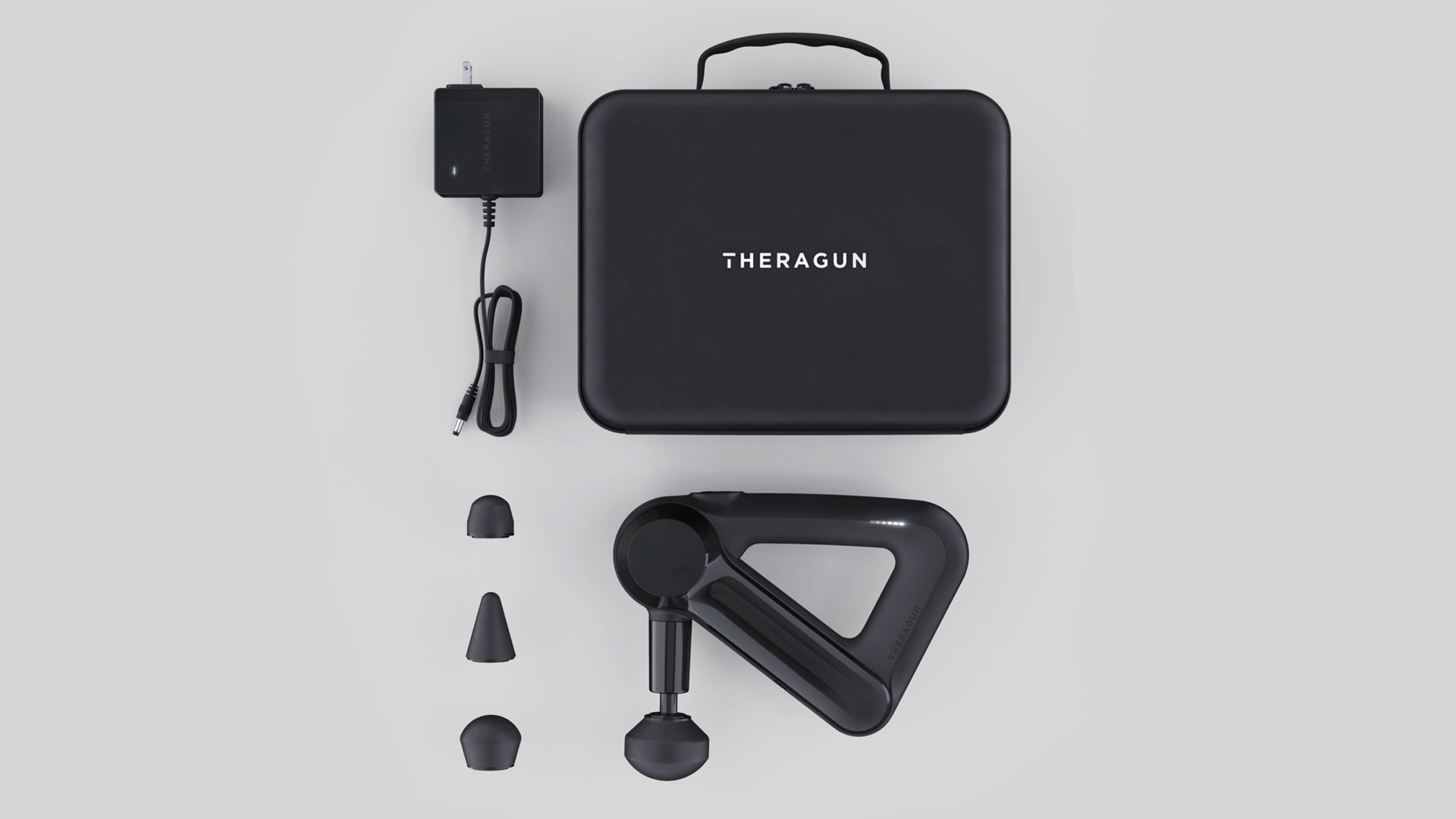 It may look a bit odd but the triangular handle of the Theragun G3 is one of its masterstrokes. It gives you multiple ways to hold it and gets you used to the idea that there isn’t a difficult ‘correct’ way to use it.

For users who want to really learn how to use Theragun, rather than applying it how they assume it should work, there are video tutorials on Theragun’s site and its ‘educational app’. Personally, and perhaps perversely, I ultimately prefer to freestyle it and it seems to ‘just work’. I’d suggest you keep it away from your face, throat and groin but hey, that’s more of a guideline than a rule.

The grip lets you get to hard to reach parts and you can easily experiment with different directions to come from and ways of applying pressure. The Theragun applies up to 40lbs of force on the higher of its 2 power settings. The lower one is for more sensitive areas and users but I can’t say I have used it much as it feels comparatively feeble.

Theragun charges up in just a few hours and lasts for 60 minutes per charge. That might not sound like much, but the point of Theragun is that you don’t need to use it for extended periods of massage. Theragun (the brand) suggests just 15 seconds per muscle group is sufficient to warm up your muscles before workouts, so that’s what I stuck to, with lengthier pummellings afterwards, or if I was feeling pained.

Well, to be honest, probably the most use I got out of Theragun was employing it days after exercise, to try to pound some stiffness out of my back, calves and thighs a day or 2 after – having completely failed to use it to warm up or immediately post-workout. You know how it is…

The G3 comes with 4 heads – the standard ball, but also a ‘thumb’ for smaller areas, a cone-shaped head and a ‘dampener’ – that’s for if you find the standard heads too painful, I assume. I found the ball head was perfectly alright for everything, but swopping heads isn’t too arduous if you want to experiment.

The G3 is not particularly noisy. It is certainly not silent, and the chattering engine noise it emits is a little intimidating. However, by all accounts, most other such massagers – including Theragun’s earlier models – literally sound like power drills, which doesn’t strike me as terribly relaxing, in even the most vigorous massage context. 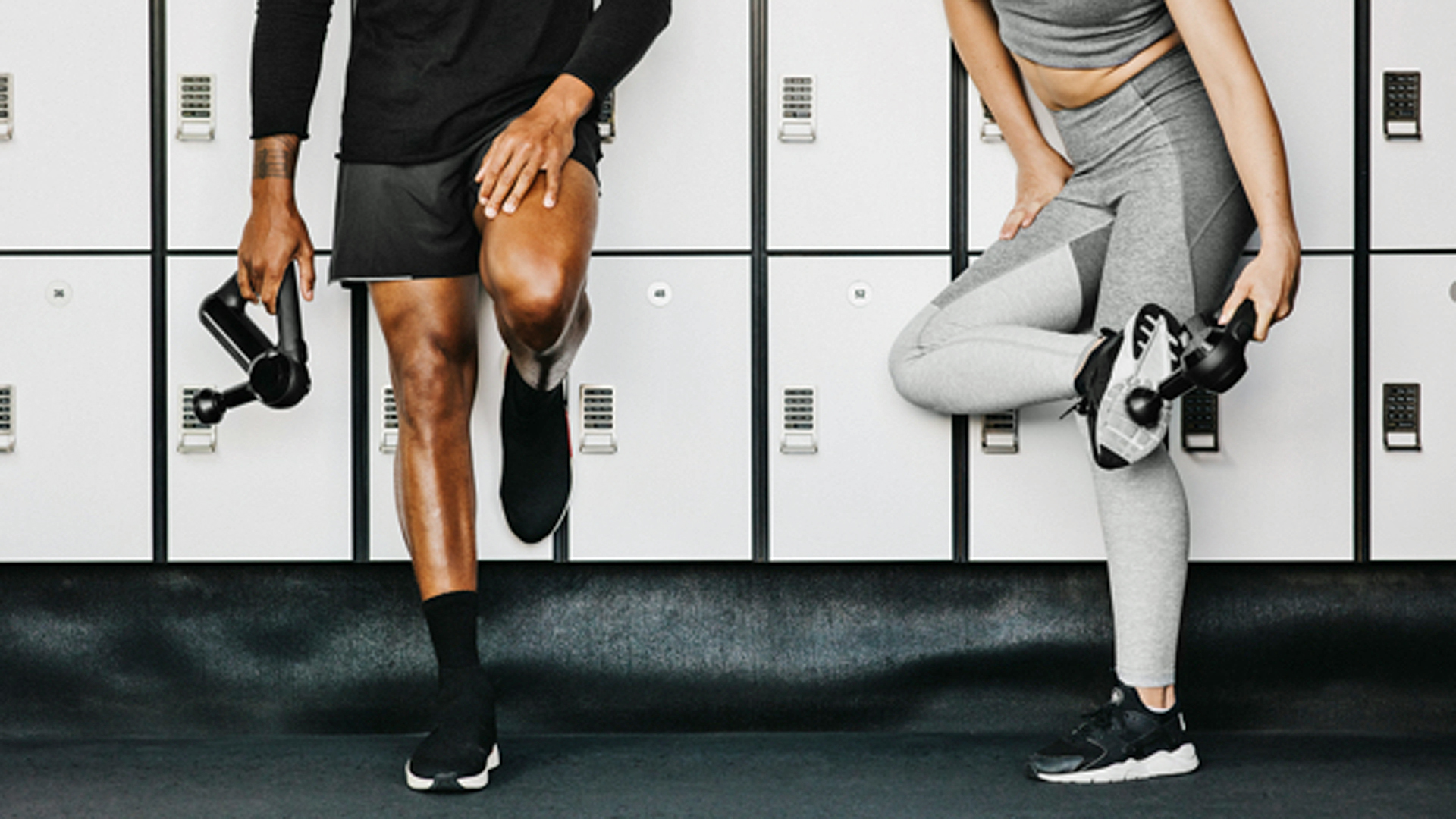 Theragun is a percussive massager that pounds the surface of your body – you aim for the muscles rather than, for instance, your kneecaps, groin or face – with up to 40bs of force, up to 40 times per second, to a depth of 16mm, although this naturally varies a little, depending on how hard you’re pressing it to your skin.

This has the effect of a very forceful massage, delivered with a power tool, and a noticeable pain-relieving and muscle-loosening effect. As I mentioned before, this pain relief comes at the price of a certain amount of different pain, because being repeatedly thumped with a power tool is never going to be a cosy experience.

However, since this pain is one you get used to, and it replaces worse pain, I can say overall if that it’s not hurting, it’s not working. Or perhaps that if Theragun is hurting (a bit) then it is working. Applied to my notoriously stiff back, of a morning, it gives a near immediate increase in flexibility and reduced discomfort. Nothing miraculous, sure, but there’s an improvement, and it doesn’t take much work or time.

Is this effect short-term and possibly achieved through a kind of physical placebo effect? I don’t know, I’m not a doctor. However, even if there is no long-term benefit, the fact remains that it seems to work, and it can be applied as often as you like, to garner repeated short-term benefits. There are plenty of testimonies online from people who have used it to manage the pain of chronic medical conditions, on top of all the satisfied athletes, sports pros and gym bunnies, who use it to sooth their sore and over-worked bodies.

Theragun G3: should you buy one?

Some of Theragun’s marketing fits into an area that as a Brit, I would describe as messianic pseudo-science. To be fair, in America it’s just called ‘marketing’, but I have felt a little dubious about reviewing this product because of the lack of peer-reviewed research into what is, on some level, a kind of medical device.

However, having given it a lot of consideration I find myself coming back to the words of the philosopher, Sheryl Crow: that if it makes you happy, it can’t be that bad. And when my back gets stiff and the G3 punches a bit more flexibility into it in about 30 seconds, Theragun makes me very happy indeed. 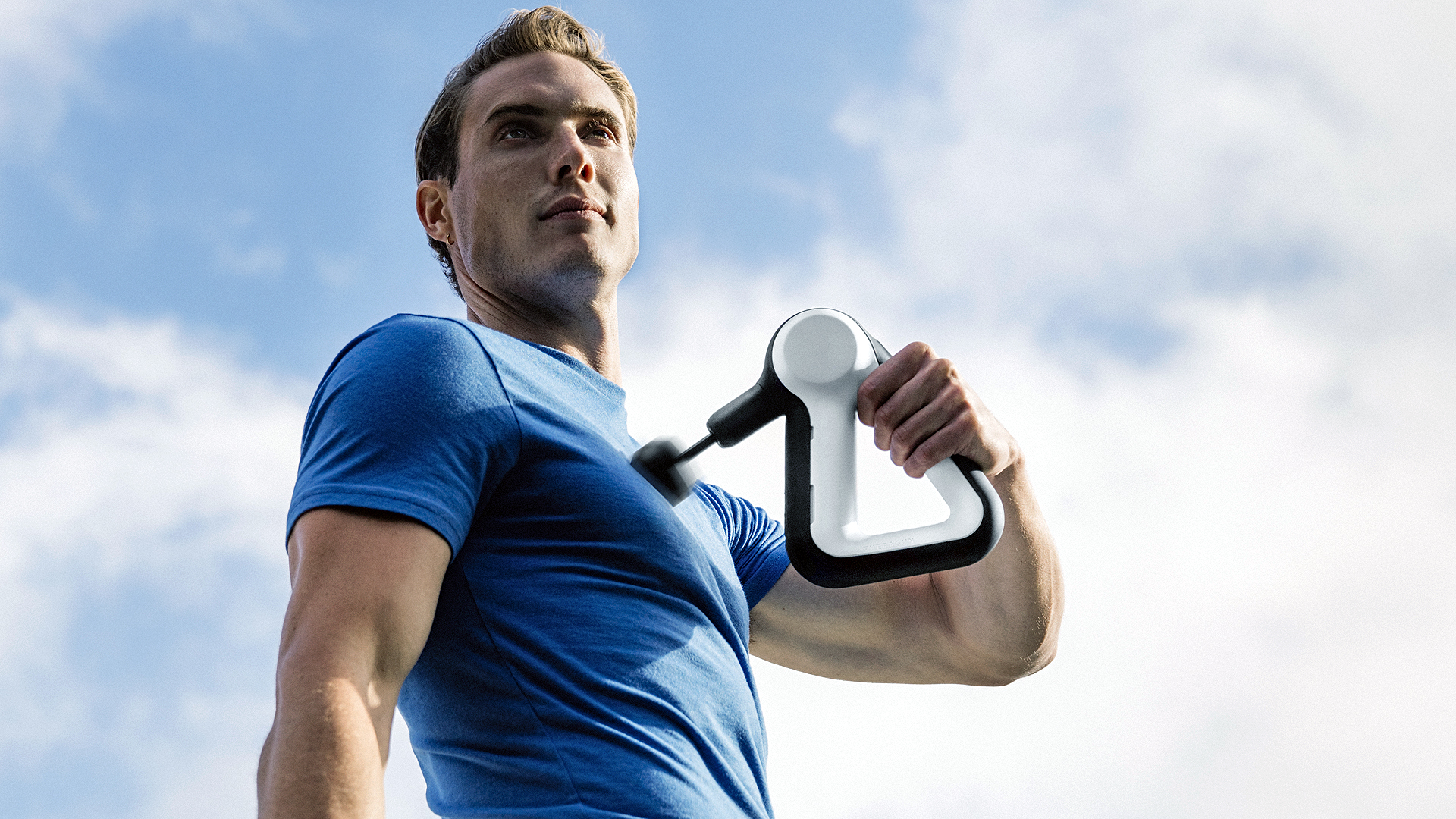 The G3Pro is a lot more expensive and puts out even more force, so I’d only recommend that for people who are, excuse my French, f***ing swole. The less powerful Liv, I haven’t used so can’t really comment but it seems comparatively toy-like. The G3, despite being $400 or £375, I think is well worth considering for anyone who suffers muscular pain and stiffness, whether that’s through exercise, age or medical conditions.

Ideally try before you buy, because it is not a gentle sensation. If you find you like it, however, you may come to really love the Theragun G3.