Buying a triathlon or time trial bike can be more daunting than buying a road bike, for example. If you haven’t got a lot of experience in bike technology, it’s easy to get lost in the details and get super confused by the different groupsets, chainsets and wheelsets. We will try to make this all clearer for you.

Triathlons come in many shapes and sizes and if you are at the beginning of your triathlon journey, you might want to consider signing up for a triathlon sportive as opposed to a race. A sportive is a non-competitive version of triathlon, so instead of worrying about having been disqualified for going slower than the cut-off time, you can concentrate on the experience and enjoy the ride (literally).

How to choose the right triathlon bike for beginners?

Assuming you won’t want to break the bank when investing in a new triathlon bike, there will some compromises you will have to make when picking a tt bike.

One of the main thing you will notice bike description mention is the type of groupset they use. A groupset is all the parts on the bike that make it move and stop, so all the equipment that transforms the kinetic energy generated by your legs and body to forward momentum (plus the brakes). This includes the crankset, the bracket, brakes, shifters and derailleurs, but even the chain and rear cassette too.

Groupsets you will see most often on time trial bikes are the Shimano 105, the Shimano Ultegra and the Shimano Dura-Ace. Of the three, the 105 is the most ‘basic’ set and the Dura-Ace is the most advanced. The ‘basic’ is in brackets because the 105 is by no means a cheap set and as with all technology, advancements from higher end models cascade down to later year entry-level models, meaning a new Shimano 105 is probably more advanced than a Shimano Ultegra from a few years ago. 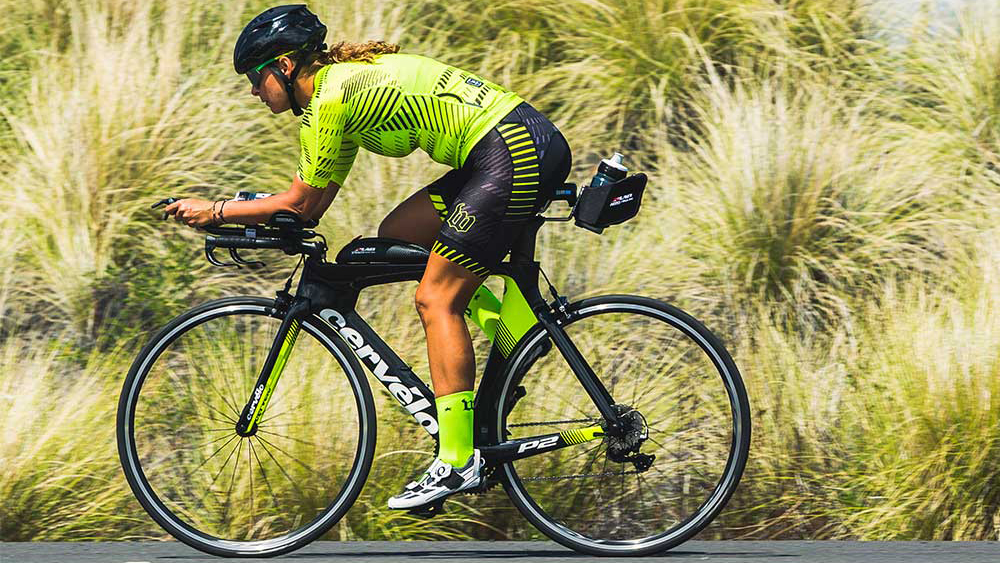 Another key factor to take into account is the frame. Many triathlon bikes have aero frames, where ‘aero’ stands for aerodynamic. This frame-type comes from the world of time trials, where they came up with the light but rigid frame composition. In time trial, every gram matters, and as technology advanced and production costs dropped, areo frames made their way from track courses into the world of triathlon, too, becoming a an everyday sight as opposed to being a toy of the top 1% of triathletes.

The wheelset is also crucial when deciding on a setup. These are made out of many different materials, but you would like something light, like carbon, to make the bike even lighter altogether.

Although all the bikes on the below list come with aero bars, there is also an option to buy a road bike and attach an aerobar to it later, when needed. That being said, many of the bikes on this list are easy to dismantle so they can be converted into road bikes easily, relatively speaking.

The best triathlon bikes for beginners, in order 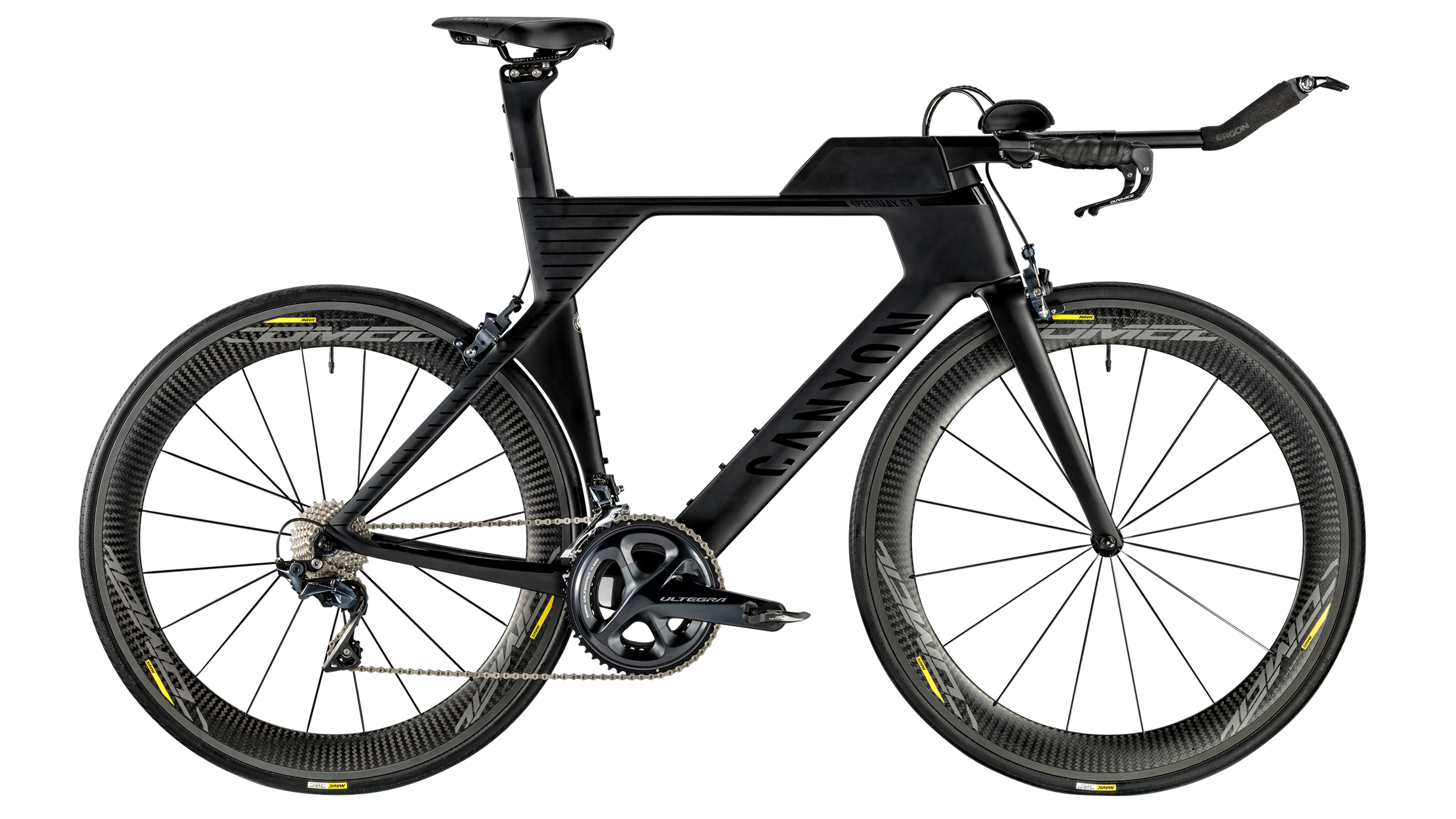 Canyon is famous for providing great quality bikes for a very reasonable price, and this is true to the Speedmax CF 8.0 as well.

The full carbon construction is as light as a feather, the medium-sized frame weighing only 8.6 kilos. The setup comes complete with a Shimano Ultegra groupset and Mavic Carbon wheels.

Canyon is so confident that you’ll like the bike that they offer a 6-year guarantee on it. Also, Canyons own Bike Guard Box gets the bike to you in a conditions that it’s almost ready to ride, straight out of the box.

Every detail has been taken into account, including the type of saddle used for the Speedmax CF 8.0, to maximise comfort as well as performance. The Fizik Mistica is a triathlon-optimised saddle with a shorter and wider nose and non-slip material on the top, you so you can ride in comfort for longer. Relatively speaking, of course. 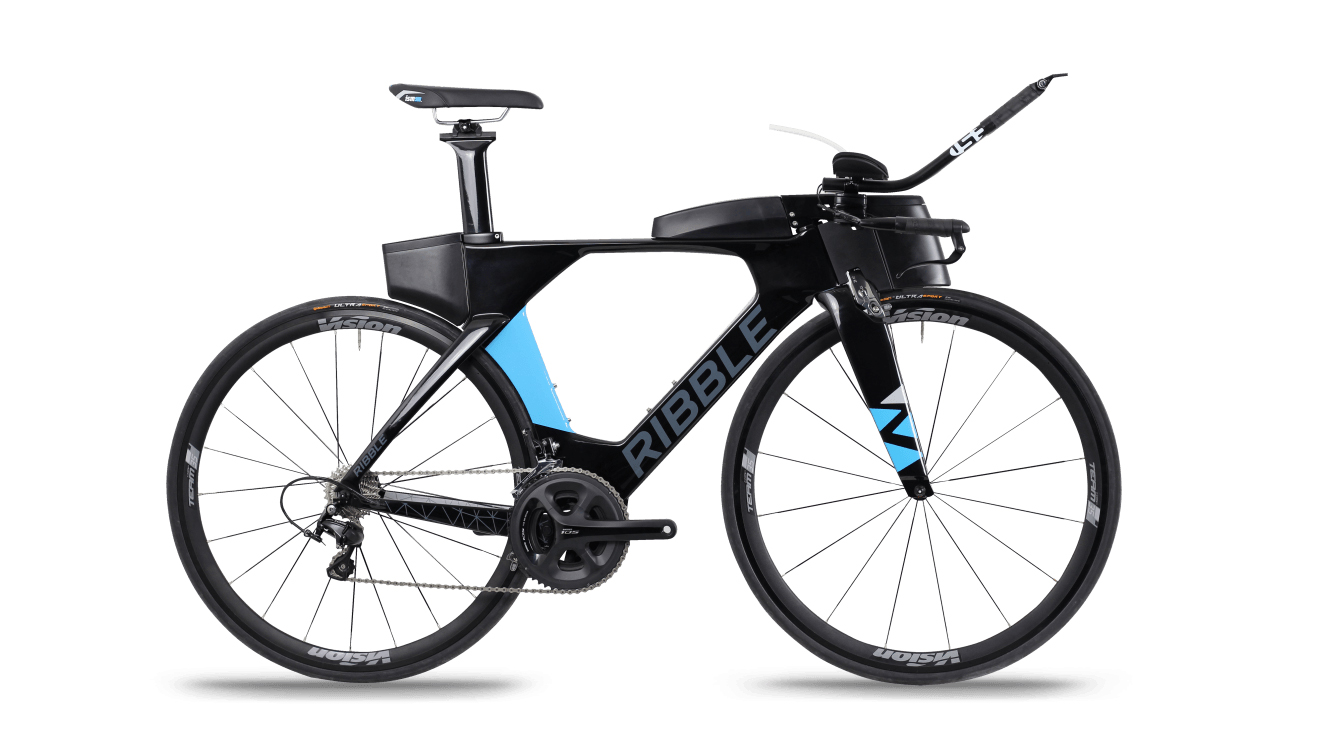 The full carbon Ultra frameset has been perfected by Ribble to provide the least amount of aerodynamic friction possible. This feature will come handy when riding the 56-mile cycling part of the Ironman 70.3 in headwind. You don’t need anything to  hold you back more than absolutely necessary.

The groupset on the Ultra Tri consists of mainly Shimano 105 R7000 pieces, apart from the brakes, it being TRP T860 alloy set. The cockpit is Ribble’s own with both bars and the stem designed for the Ribble Ultra Tri. The wheelset consists of Mavic Aksium Clincher wheels and Continental Ultra Sport 2 tyres, with an extra deep profile.

Given the thick profile and all the additional storage units on the frame, the Ribble Ultra Tri is slightly susceptible to side wind, but since the bike is very light, it won’t affect your riding experience all that much, especially in aggressive riding positions. 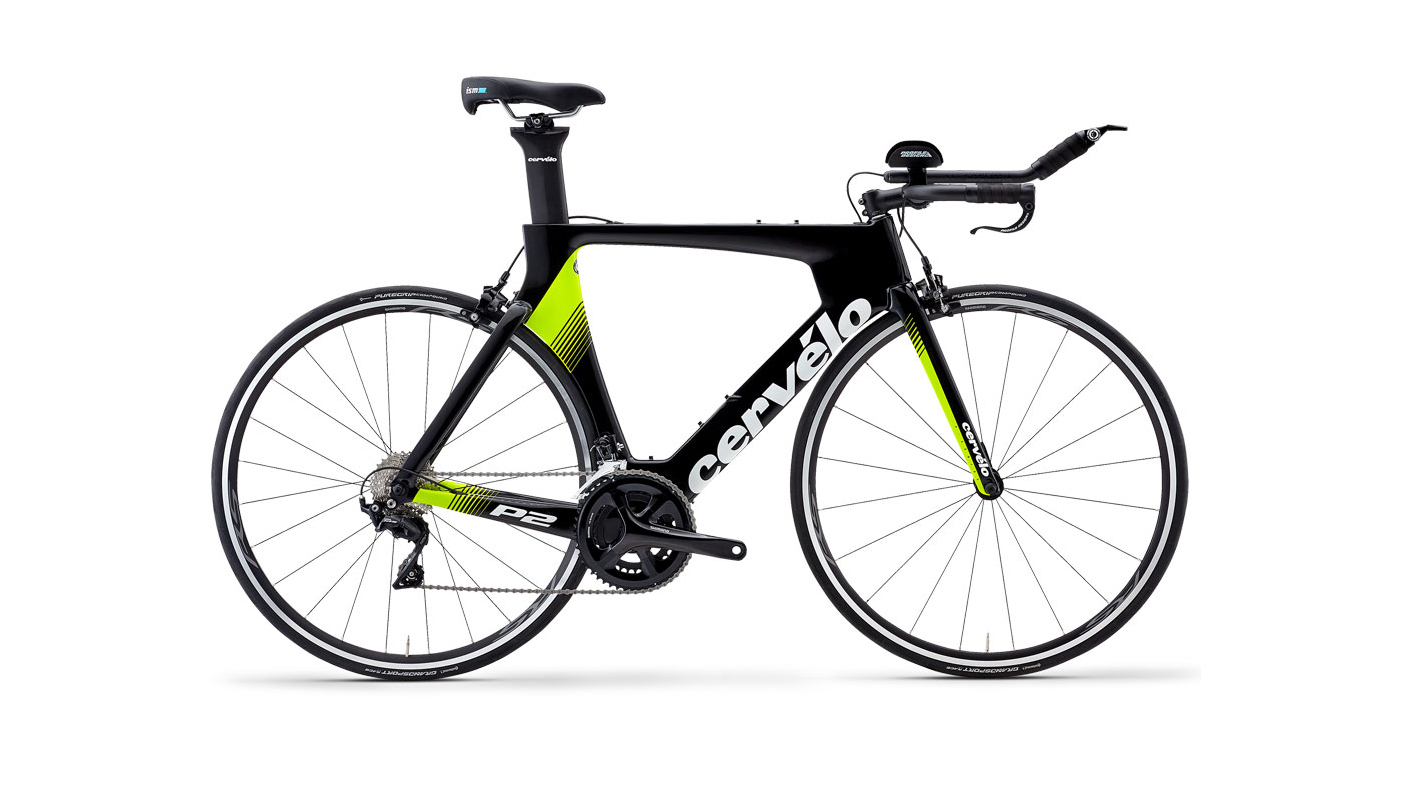 The all-carbon P2 comes with a Shimano 105 R7000 groupset, an excellent mix for all the price conscious triathletes out there. Cervelo is the most popular bike brand among Ironman Kona competitors, so you can count on them knowing what makes a good triathlon bike.

The P2’s sleeker design reduces drag in side-wind conditions, without compromising on the stiffness you’d expect from an aero frame. The extended seat tube cutout, for example, follows the curve of the rear wheel to improve aerodynamic performance.

Cervelo found a way to make the P2 less like a TT bike and more of a bike you can just jump on to cycle for a few hours. Get a set of Shimano 105 R7000 Carbon Pedals and you are ready to go. 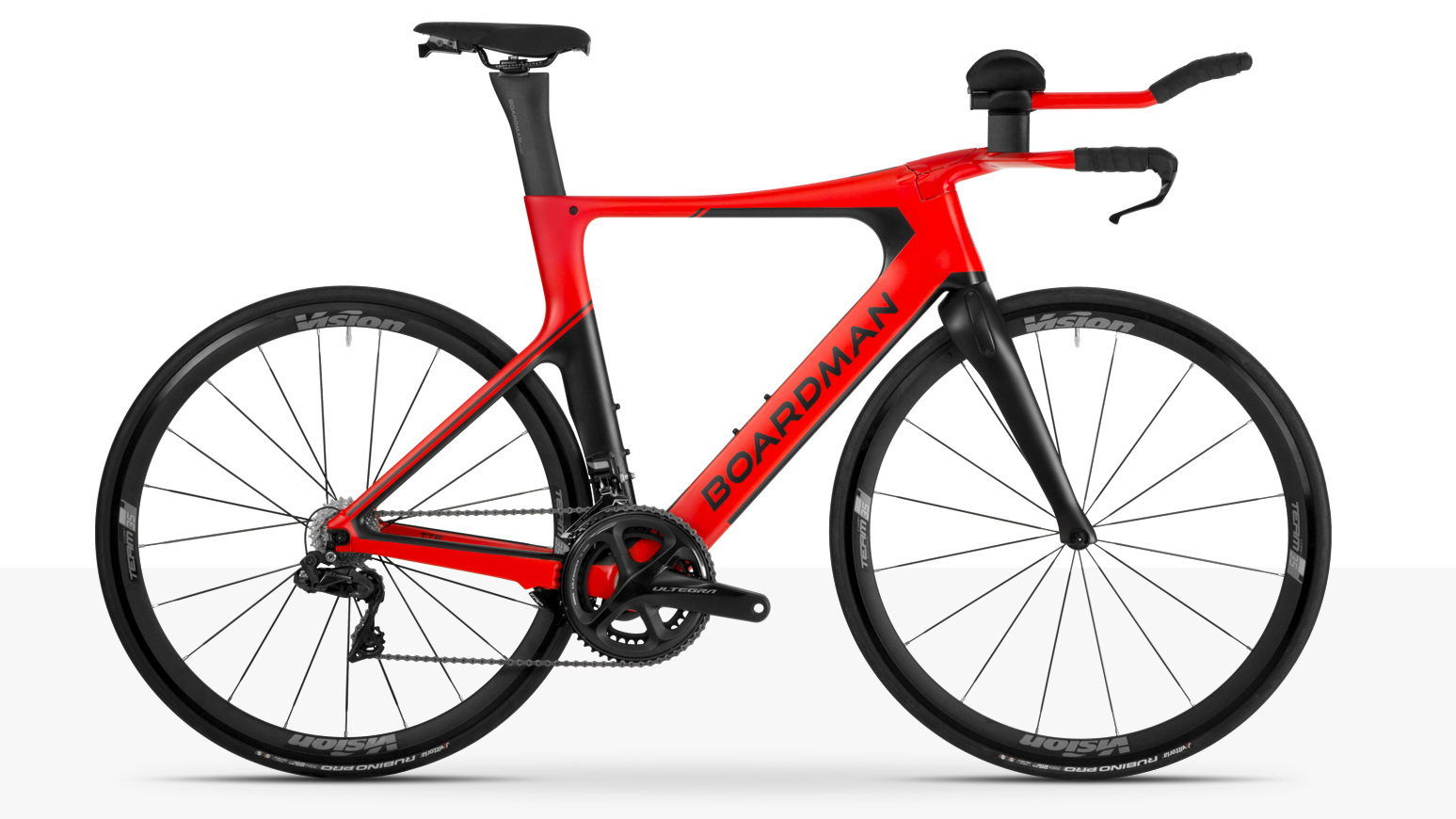 The most appealing aspect of the Boardman 2019 TTE 9.4 is the hidden cabling and brake system. You look at the bike and don’t know why it looks sleek. Then you realise you can’t see any cables running along the tubing, nor can you see any glaringly obvious brake calipers anywhere.

Boardman has the following to say about the forks and stays on the 2019 TTE 9.4: “…we’ve profiled the inner and outer faces of the seat stays and fork legs to reduce the interaction of the rotating air with the frameset. We’ve created as much space between the sides of the wheel and the frame as possible without increasing the frontal area more than necessary”. No place for drag here.

The Boardman 2019 TTE 9.4 uses a Shimano Ultegra groupset mix, coupled with an all-carbon frame and the Vision Team Comp 35 wheels. The result is a light time trial bike that is capable of delivering great results, let it be a triathlon race or an hour record attempt. 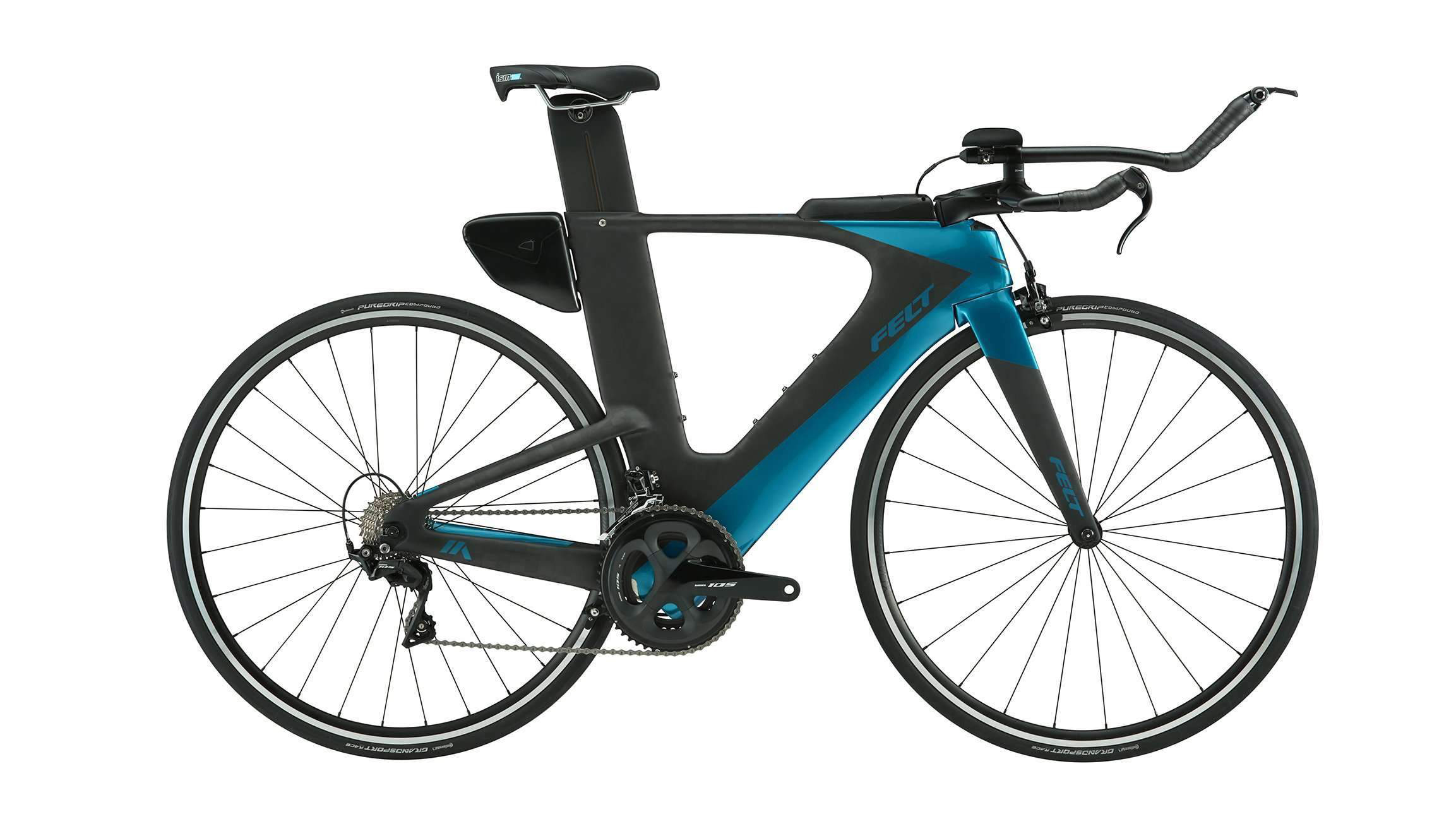 The Felt IA Series won the Ironman World Championship five times out of the last six years, which says a lot about the performance of this series. The IA | Advanced, Rim Brake is your entry to this very prestigious family.

The Felt IA | Advanced, Rim Brake | 105 | 2020 uses a Shimano 105 R7000 groupset, coupled with an all-carbon aero frame. For the 2020 year, Felt introduced the the lighter and stronger Textreme frameset to the entry level model of the series, to everyone’s delight.

The bike is slightly heavier than the Canyon and Boardman entries on this list, but still comes under 10kg, which, considering all the tech that’s involved here, is amazing.

All the better, Felt also included A BTS storage pack too, so you can store your wheel fixing accessorises or food/drinks in an aerodynamic compartment as well.