Serious road cyclists understand the importance of staying in shape. There’s nothing worse than exiting a winter hibernation period, throwing a leg over the slender carbon-framed bicycle and realising that the first hillock has the potential to prematurely end the ride.

It’s the little things that make the big differences when the first spin of the season comes around, like the dull ache in a weak lower back, a spot of chafing in the private areas and weakness in the legs when it’s time to drop the hammer.

This is why some folk go to great lengths in order to create the ultimate training area at home – a space where all of the above can be mitigated with regular indoor rides, no matter the weather.

Wahoo, manufacturer of one of the most famous turbo trainers around – we’ve all seen Team Sky using them at the Tour de France although we won’t be doing that any more, clearly – claims that it has the perfect bundle for creating the ultimate riding experience. What cyclist could resist the opportunity to test that?

That’s why I’ve spent the last month in my shed, pedalling my bike on a Wahoo KICKR turbo trainer, with the front wheel clamped to Wahoo’s Climb attachment, which actually simulates hills, in front of the Wahoo Headwind which, as its name suggests, recreates the ravaging effects of wind on your bike’s progress. 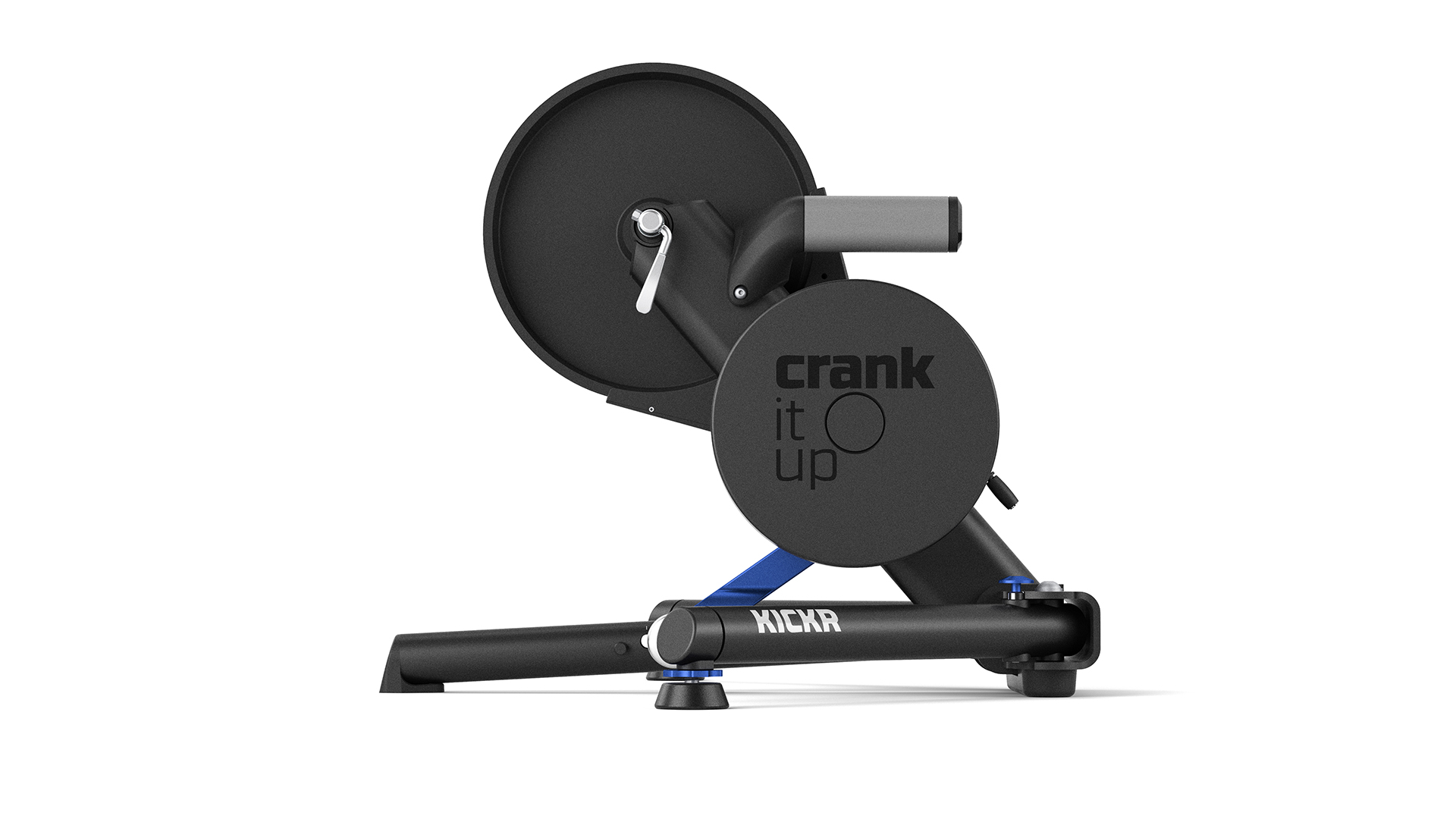 The most important part of this set-up is the turbo trainer and Wahoo’s recently refreshed KICKR is up there with some of the best on sale.

Unlike older turbo trainers, where the rear bicycle tyre typically turned rollers, this model connects the bike directly to its own free-wheeling 11-speed cassette, which instantly gives a more realistic feel.

The latest model also boasts a larger flywheel that now operates in near-silence. That will be music to the ears of anyone who can’t stand the incessant drone of rival trainers. 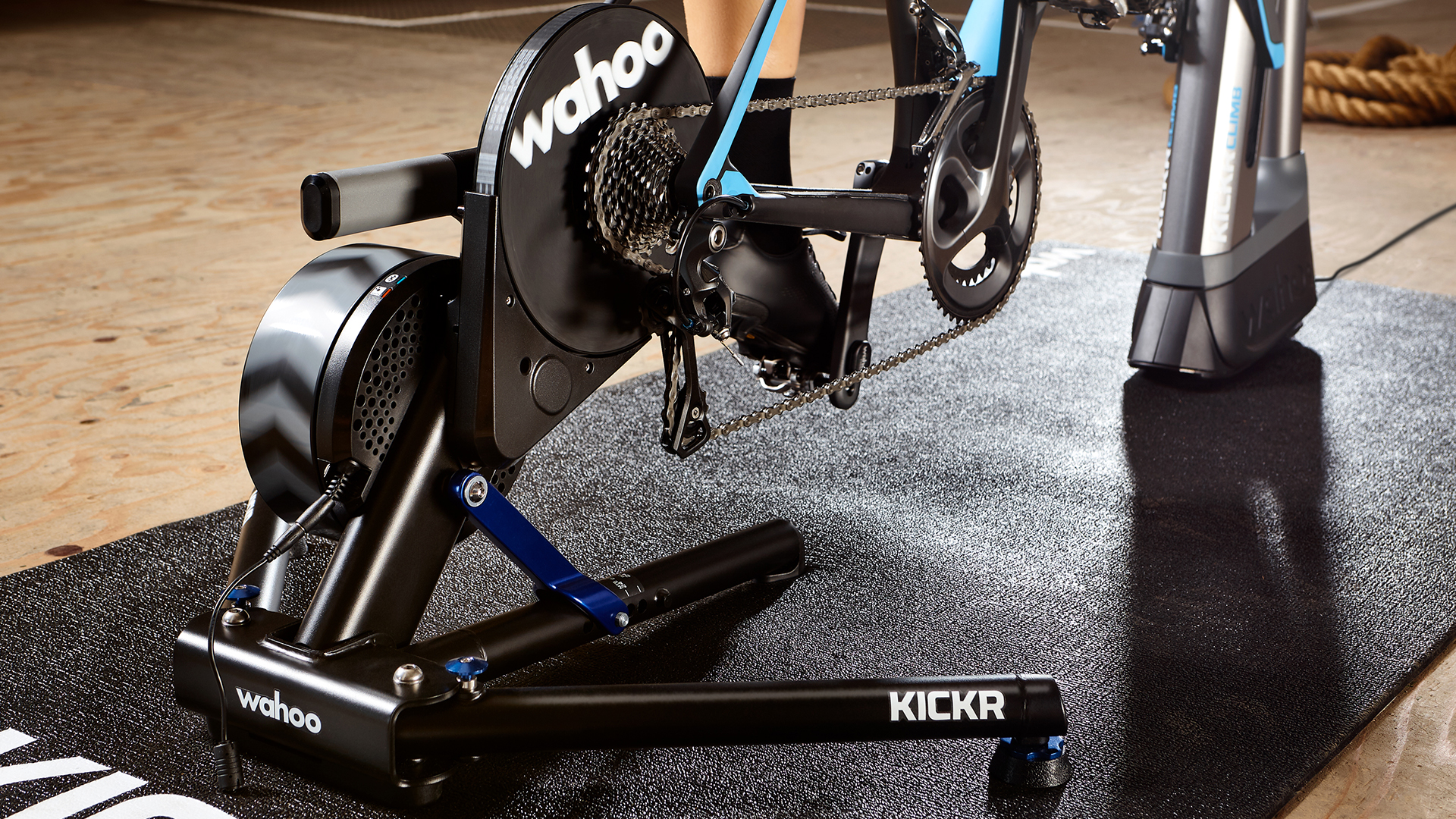 On top of this, the design has been altered so it houses bikes with disc brakes, while ANT+, ANT+ FE-C, and Bluetooth connectivity makes it really easy to keep an eye on stats via third party apps and training simulators, such as Zwift.

The initial set-up is a bit of a faff, as it requires the rear wheel of your chosen bicycle to be removed, the correct spacers selected and then likely some minor indexing adjustment to ensure the bike shifts gears correctly.

From here, it’s a case of linking the KIKCR up with your chosen app via Bluetooth, which in our case took a bit longer than we ideally wanted. But once it connected to our phone and laptop, it automatically synched every time the system was activated.

The unit itself feels well built and the overall heft of the thing is nothing to be sniffed at. If you think you’ll be moving it around the flat a lot, you may want to think about investing in something lighter. 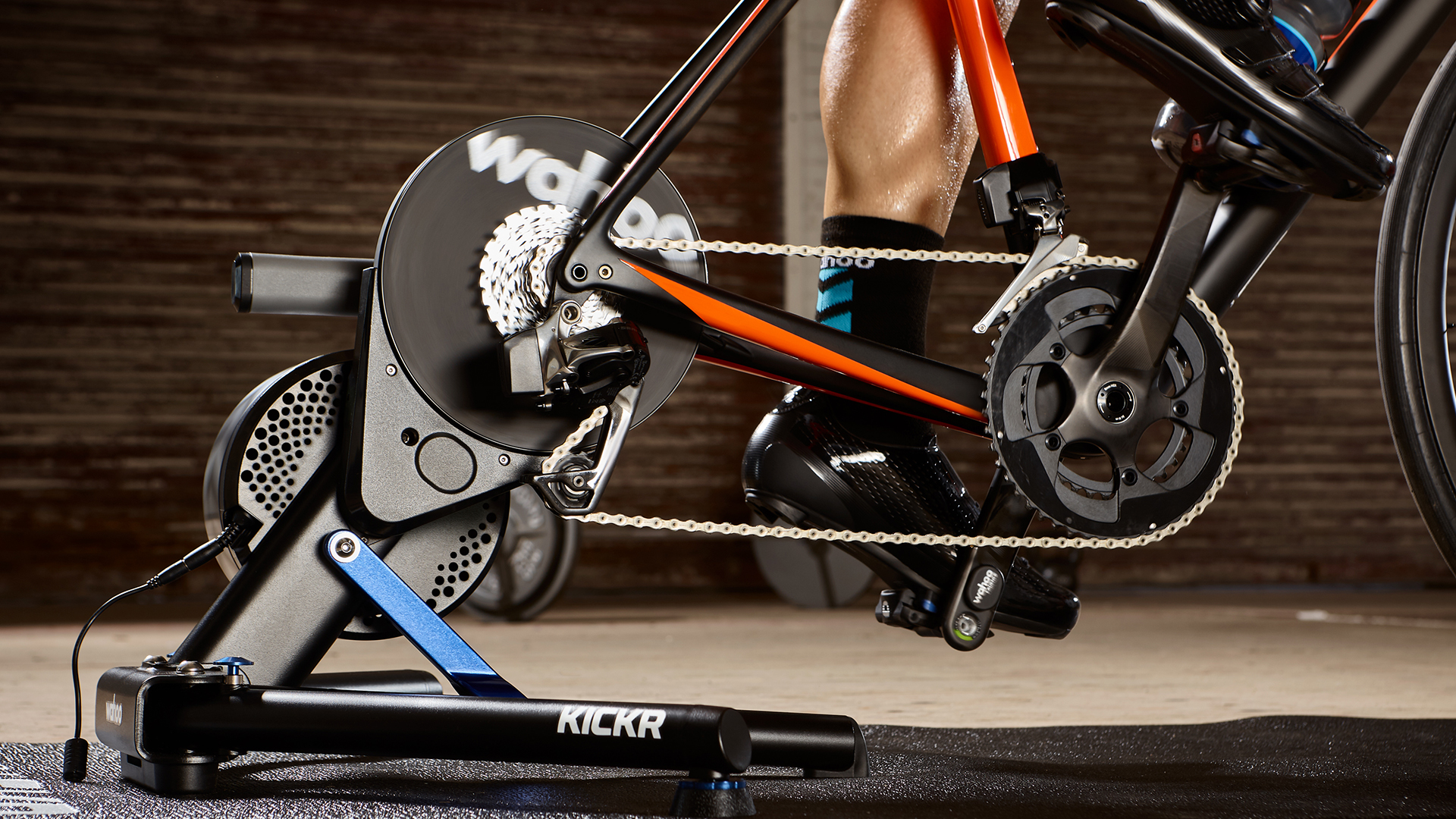 Still, its stabilising arms fold almost flat to the unit for easy storage and there’s an over-sized handle for lugging the brute around.

Riding feels smooth and realistic, with the option to manually adjust resistance through the Wahoo smartphone app, or enjoy trainer assistance from one of a number of virtual training partners.

Zwift and The Sufferfest, for example, uses a thing called ERG mode (short for ergometer) that automatically selects the resistance on your turbo trainer to match a wattage output threshold during a workout or imitate climbing a hill.

We’d recommend investing in a cheap, handlebar-mounted smartphone holder so you can easily adjust settings and some kind of sweat-soaking mat to sit underneath the bike, because you will leak a lot. 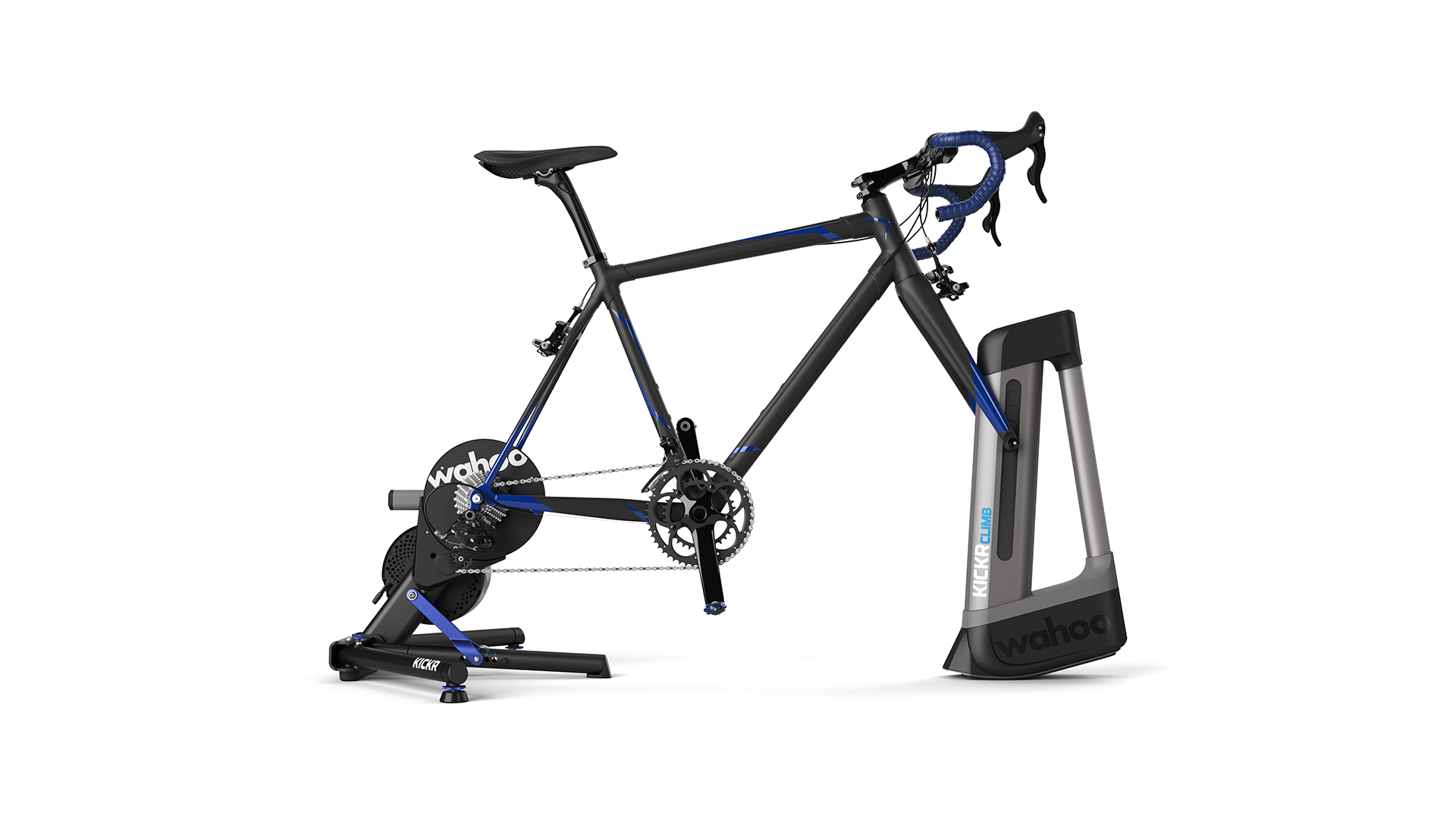 The second element to Wahoo’s realistic indoor cycling experience is the new Climb kit, which is purchased separately (£499.99) and attaches to the front forks of your bike to mimic pedalling up a steep climb. This does not, we should add, make cycling more difficult in itself; the KICKR does that by increasing the resistance it puts up.

So what’s the point of that, then? It’s a fair question. However, pounding up steep gradients in real life requires a different body position, and uses different muscle groups in the legs, back and abdominals than those activated when cycling on the flat.

The KICKR Climb can ascend up to 20 per cent (and, arguably less usefully, descend down to minus 10 per cent. Full compatibility with lots of virtual cycling companions including Zwift means you get the full hill-climb experience in real time.

Setup of Climb is extremely simple and Wahoo’s gear typically connects together over Bluetooth with very little fuss. It’s simply a case of selecting the correct spacers to suit your bike, sliding off the front wheel and reconnecting a quick release skewer. 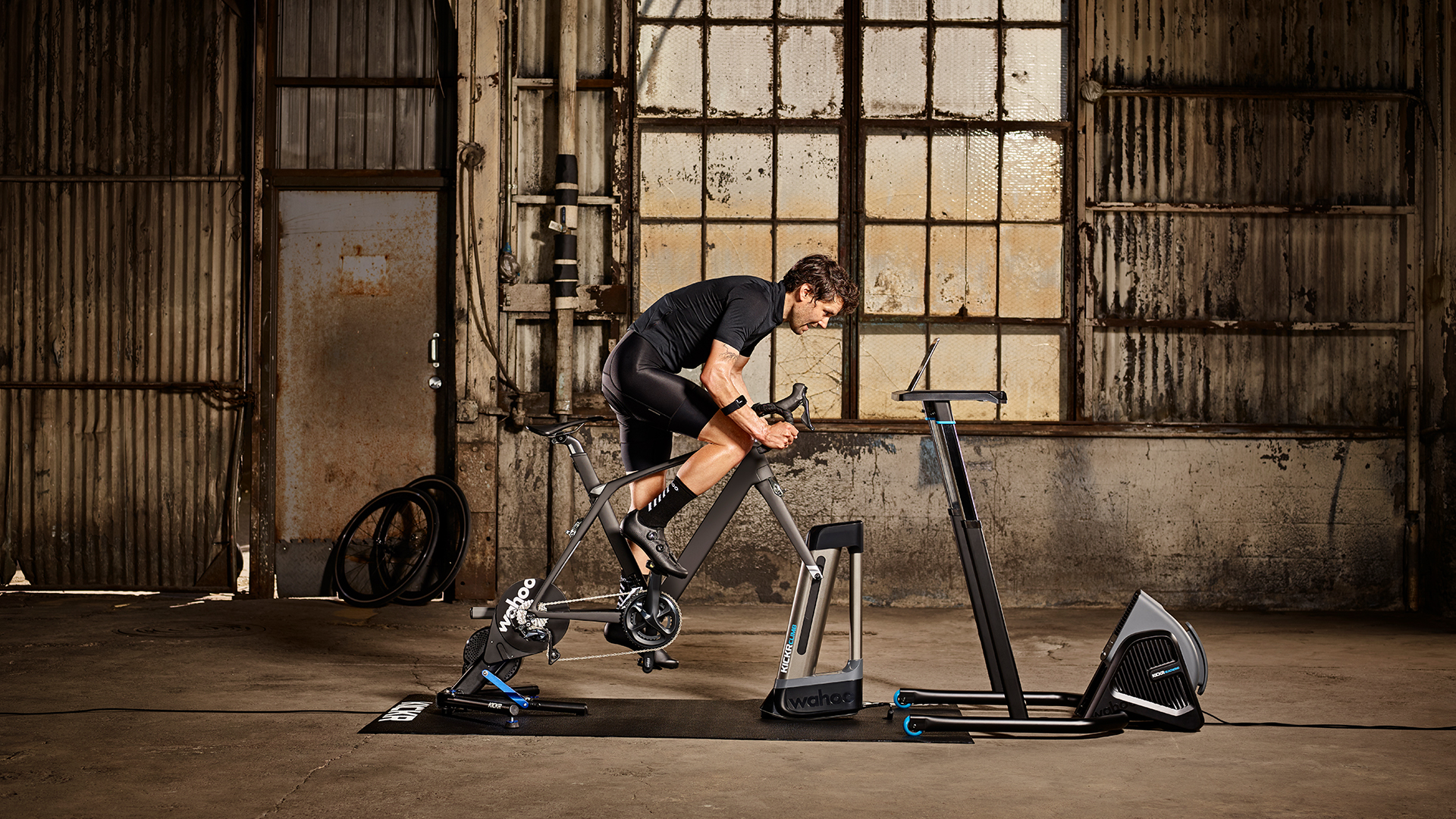 Once in place, it can either be manually adjusted with a neat little remote that clips to the handlebars via a rubber strap or left to take instruction for your virtual training partner and mimic the landscape in question.

Does it work? Yes and no. I have to admit, the initial few ‘inclines’ felt more like the machinery was helping me pop the mother of all wheelies, rather than climb a hill, but you soon get used to the slightly weird elevation angles.

It’s also surprisingly stable, despite some movement with the bars, but it’s amazing how much effort you can put through the pedals without anything toppling over or coming unstuck.

The only issue we have here is price, especially given that Climb can’t help but feel like a bit of a novelty product. Still, it brings another element to Zwift, which in turn makes indoor cycling a bit more fun. We could quibble it’s a lot of money to shell out when riding outside is free and more fun, but at least it removes weather worries. 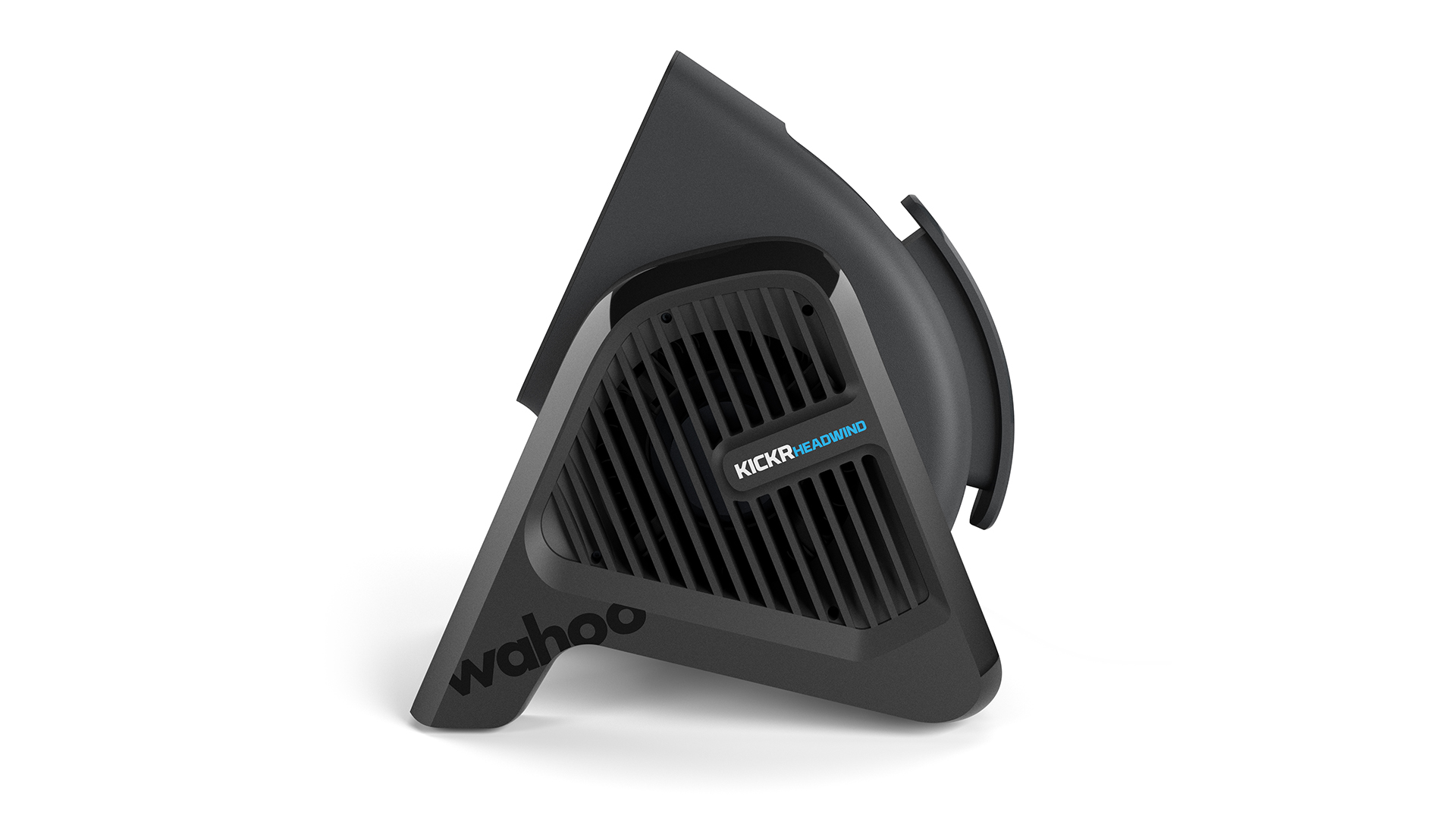 Let’s face it, this is essentially a fan that blows exactly the right amount of cold air when you need it, but it looks really bloody excellent and nicely rounds off a package of training gadgets that will be the envy of the neighbourhood.

Anyone who has spent any time on the indoor trainer will attest to the amount of sweat that somehow manages to spring from the pores due to a lack of airflow. It gets everywhere: on the floor, on the bike and on the dog if you’re not careful.

Investing in a fan is a must, but unlike your basic oscillating floor fan from Argos, this puppy mirrors the shape and positions of a cyclist’s body and pumps out specific lumps of air in the areas where it is needed.

More importantly, it synchs up with heart rate sensors via built-in ANT+ technology to adjust to different workloads and efforts. As soon as it detects your heart rate is spiking, it will gradually increase the amount of air produced.

This ensures riders aren’t getting too cold during the easy sections of a workout, but are served high-velocity, sweat-busting airflow when the going gets tough.

For non-Dyson owners, £199.99 might seem like a lot of money to pay for a fan, but I have to say that I fell in love with this technology more that the previously mentioned Climb – it serves more of a purpose and really works.

I’ve always rued the post-turbo session mopping up of sweat from the wooden floors, but this fan helped to keep the majority of the perspiration away and genuinely gives the impression of a nice cool headwind in the process.

Wahoo offers all of the aforementioned technology as a K.O.M bundle, which costs between £1,219.99 and £1,674.99 depending on the turbo trainer you opt for.

It might seem like a large sum when you consider that less sophisticated turbo trainers start at around £150. Clearly, however, KICKR and its accessories aren’t aimed at faint-hearts or newbies.

Cyclists of yore might scoff but Zwift and other virtual training partners are becoming as popular as cycling out on the open road, and it’s easy to see why, in some ways. It’s safer, more colourful and the social element allows people to train with other cycling fanatics from all over the world, regardless of the weather.

Because of this, punters are paying increasing amounts of money to create lavish training caves and this Wahoo set-up is probably the best that money can buy. For those who love to cycle but don’t necessarily want to go anywhere, it’s a great investment.