With a global diet industry worth US$168.95 billion, it’s clear the world is obsessed with weight loss. But what’s the best diet for losing weight and improving health? One of the most promising diets to have gained attention recently is intermittent fasting, which the media has crowned a miracle weight loss solution. But according to a recent study, when it comes to losing weight, intermittent fasting isn’t any more effective than conventional dieting.

Intermittent fasting is an eating pattern that condenses daily food intake into one time-restricted period, then fasting for the rest of the day. One of the most popular versions of intermittent fasting is the “5:2 diet”. This allows five days of unrestricted eating and two days (usually non-consecutive) eating a very low-calorie diet, typically about 500 kcal. The diet’s biggest appeal is the flexibility to tailor it to your lifestyle.

Enthusiasm for intermittent fasting was fuelled by data from animal studies that suggested fasting could help reduce the risk of diabetes, cardiovascular disease and certain types of cancer. However, few studies have actually examined the effects of intermittent fasting on humans for longer than six months. Carrying out long-term studies that control diet is difficult because it’s hard to get people to stick to them, and results can be affected by outside factors.

This recent study was conducted over a 50-week period, making it one of the longest intermittent fasting studies to date. Researchers split 150 participants into three groups. One group followed the 5:2 intermittent fasting diet (with two non-consecutive “fast” days per week eating about 500 kcal), while the second group reduced daily calorie intake by approximately 20%. A third control group weren’t instructed to change their diet.

During the first 12 weeks, a trained dietitian worked closely with participants to ensure they stuck to the allocated diet. After 12 weeks, participants continued following their diet without the dietitian. The effects of the diets were then evaluated using a number of health assessments after 12, 24 and 50 weeks.

Drop-out rates were low but similar for both diet groups, suggesting participants found these similarly easy to stick to. Other long-term intermittent fasting studies in humans have shown similar results. 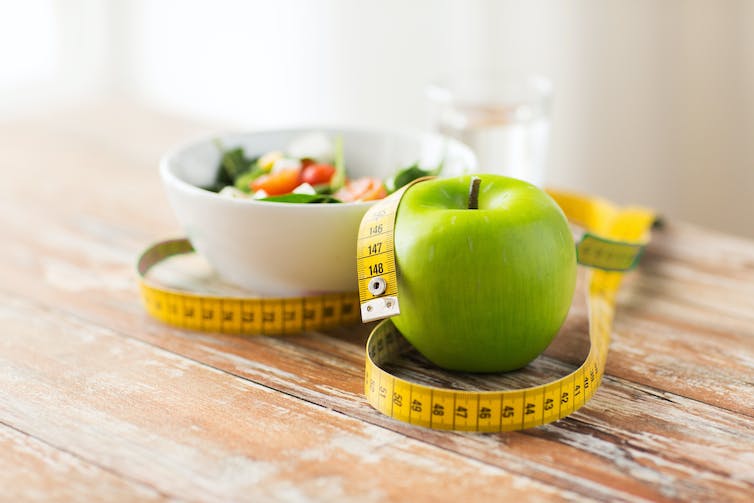 My own research found that people following a very-low calorie diet (550 kcal) experienced reduced levels of the “hunger” hormone ghrelin the following day. As high concentrations of ghrelin are associated with feeling hungry, lower concentrations of it after a very-low calorie diet suppress appetite, and could help people with short-term weight loss.

However, this study wasn’t able to show the same health improvements (such as insulin sensitivity) that previous animal studies showed. These studies used longer, more severe methods of calorie restriction (often fasting completely), which the 5:2 diet doesn’t normally include.

But one human study found that following the 5:2 diet for three months improved insulin sensitivity over daily calorie restriction diets, if the two very-low calorie days were done consecutively. This suggests intermittent fasting might provide additional benefits if the period of calorie restriction is extended.

Whether intermittent fasting can be successful beyond 50 weeks is not yet known. And though drop-out rates were low, the study still demonstrated that intermittent fasting isn’t immune to the gradual decline in adherence associated with other diets. This means, like most diets, it’s only effective when there’s an active effort to maintain it.

Questions still remain about intermittent fasting, specifically whether all methods (such as the warrior diet, where you only eat one large meal in the evening) are similarly effective. Another form of intermittent fasting, known as time-restricted feeding (where people can only eat during a fixed four, six, or eight-hour eating window) is also receiving considerable attention, with one study suggesting the time of the day you eat might be as important as what you eat. Research is underway to determine the best time to eat, how long you should fast, and how these diets specifically affect health

When it comes to dieting, there is no one-size-fits-all solution. This study showed that intermittent fasting and calorie restriction are equally effective for weight loss and improving metabolic health. So the best, and likely most successful, diet for yourself is probably one that fits your lifestyle.