The UK’s diet industry is thriving to say the least. More than half of British adults try to lose weight by controlling their calorie intake each year. Unfortunately, losing weight is not as easy as turning down a biscuit, or opting for salad. And even those who have been successful in their dieting endeavours find it difficult to do.

So why is it that even when we have the best of intentions, dieting is so difficult? Why can’t we control those cravings?

We’ve all done it: walked past a tasty-looking supermarket stand, or smelled something delicious and immediately started drooling over whatever treat is on display, regardless of calorie content or nutrition. Sensory food cues like these can be difficult to ignore and aren’t just triggered by taste or smell – advertising or brand logos can tempt us in too.

When we are hungry, the hormone gherlin stimulates the brain, which means that we notice food cues more. Researchers have also found that our brains pay more attention to cues for unhealthy foods – those which are high in sugar and fat – than healthy foods, when we are hungry. In studies where pictures of high-calorie foods were shown to participants, it was found that the cues elicited anticipatory appetite responses, such as salivation, cravings and a reported desire to eat.

All of this together means that the attention-grabbing properties of high-calorie foods are likely to present a significant challenge for individuals who are attempting to lose weight – particularly if their diet makes them feel hungry.

On a positive note, it may be possible to train ourselves to ignore tempting cues. One study has shown that participants who were taught to ignore high calorie food cues on a computer-based task consumed less snack foods than those who were trained to pay attention to them

Dieting often involves “giving up” more pleasurable foods in an attempt to reduce calorie intake. But if we are asked to avoid eating a food we enjoy, researchers have found that we will crave it – and even have a greater desire to consume the forbidden item than if we have not been deprived. 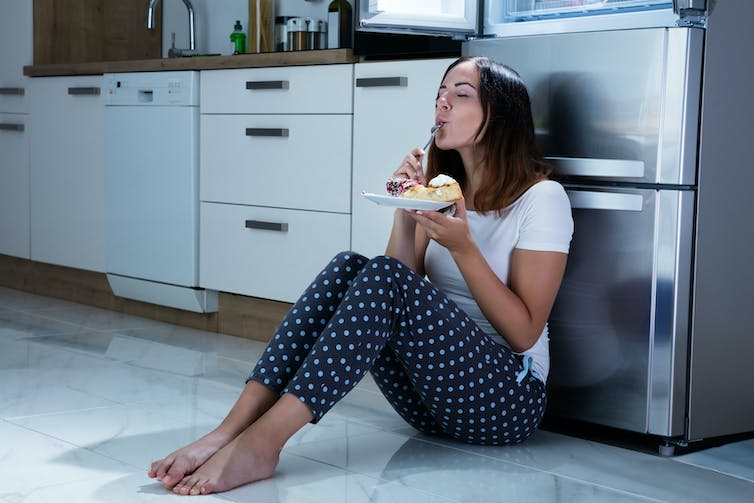 In another study, frequent consumers of chocolate were asked not to eat any for a week. In this case the participants found images of chocolate and other high-calorie food items more salient – the deprivation had made them want the high calorie foods more – than the chocolate eaters who had not been deprived. In addition, when asked to taste a forbidden food, it has been found that research participants who have been deprived of it will typically consume more calories.

All of this means that even when dieters attempt to avoid foods that are pleasurable, the behavioural and cognitive response to deprivation may inadvertently be creating more temptation.

When trying to lose weight, choices about what to eat and when it should be eaten are usually constrained by the rules of a chosen diet plan. But rigid dieting rules are problematic, as any eating behaviour that does not rely on the physiological signals of hunger increases the risk of overeating.

Another problem with dieting rules is that only a small violation – a sneaky slice of cake, for example – is enough to derail the whole diet. Researchers call this the “what-the-hell effect” – and it has been demonstrated in a number of laboratory experiments. Studies consistently show that dieters who believe they have consumed a high-calorie snack – and so have broken the rules of their diet – will consume more calories during a later meal than those who do not think they have violated the rules.

Although in real terms eating a few extra calories is unlikely to have a major impact on a diet, such lapses can have a bigger psychological impact. Dieting “failure” is likely to trigger negative emotions such as guilt or stress, both of which are known to cause overeating.

So what can be learned from all of this? Diets which require the dieter to follow rigid rules or forbid them from consuming foods they enjoy appear to be problematic, as they paradoxically increase the risk of overeating. Instead, it may be useful for dieters to acknowledge that humans are inherently drawn to high-calorie foods and that these cues present the most temptation if we are hungry.

Rising rates of obesity mean that many more of us are turning to diets to lose weight. However, while there is no perfect diet to help us achieve our health goals, understanding how the brain works, and recognising the psychological effects of dieting may help us regain control in the face of temptation.