Hand-held toys known as “fidget spinners” – marketed as “stress relievers” – have become so popular and distracting in classrooms that they are now being banned in many schools. And it’s not just kids who like to fidget. Look around your office and you will probably see people bouncing their legs up and down, turning pens over and over in their hands, chewing on things, sucking on their lower lips and pulling bits of their beard out – seemingly completely unconsciously.

But why do we fidget, and why do some people do it more than others? And if it really helps to relieve stress, does that mean we should all embrace it?

These are actually rather difficult questions to answer, as there appear to be various definitions of what fidgeting is and why it happens. However, there are some interesting, if unexpected, theories.

Cognitive research suggests that fidgeting is associated with how stimulated we are. That is, fidgeting may be a self-regulation mechanism to help us boost or lower our attention levels depending on what is required – either calming or energising us.

People who fidget a lot are generally more prone to mind wandering and daydreaming. We also often tend to fidget while our mind is wandering during a task. If your mind wanders, you are likely to perform more poorly on whatever task you are doing. Similarly, you typically perform worse while you are in the process of fidgeting – this has been shown to affect memory and comprehension.

This means fidgeting may indicate a problem with attention. But it might also be the solution. Fidgeting could provide physiological stimulation to bring our attention and energy to a level that allows our minds to better focus on the task at hand.

Supporting this, one study found that people who were allowed to doodle while monitoring a phone conversation for details remembered more facts later than those who weren’t. We also know that people with ADHD do better on some cognitive tasks when they are engaged in greater spontaneous bodily activity (though no such effect was seen for children without ADHD).

The biological sciences, however, reveal a somewhat different picture. This evidence suggests that fidgeting might be a carefully programmed response that helps us unconsciously maintain our weight.

In 2000, a study published in Science, elegantly demonstrated this. The researchers overfed a group of healthy, non-obese volunteers by about 1,000 calories a day over a period of eight weeks. The participants’ bodies appeared to fight back against the overfeeding with a large increase in fidgeting, posture changes and random tensing of their muscles. However, different people gained vastly different amounts of weight in response. This was strongly predicted by how much they were fidgeting – people who moved more put on less weight.

But how can such tiny movements make a difference? Well, it turns out fidgeting while sitting or standing actually increases the amount of calories you burn by 29% and 38% respectively (as compared to lying still). Consequently, it can account for anywhere from 100 to 800 calories burnt off as heat energy per day.

Given the WHO estimates that we only need to eat 100 to 200 calories more than we expend to incrementally gain weight, the small amount exerted by fidgeting could be enough to address this imbalance. So fidgeting may actually be like nature’s inbuilt Fitbit alarm. Supporting this, a study following 12,000 women over 12 years found that high levels of fidgeting were associated with lower mortality in a group of women who spent a long time sitting per day.

Unfortunately, you may not be able to learn to become a squirmy person – it seems some people are just born fidgeters. There may even be a genetic component – studies show that levels of spontaneous physical activity are more similar in families and between twins.

One final explanation for fidgeting is that it represents a behavioural coping mechanism for stress. These theories of fidgeting often focus on particular “self-contact” forms of behaviour – like pulling, scratching or biting of the hair or skin (called “displacement behaviours”). Whether these represent a “special class” of fidgeting, however, remains unclear. 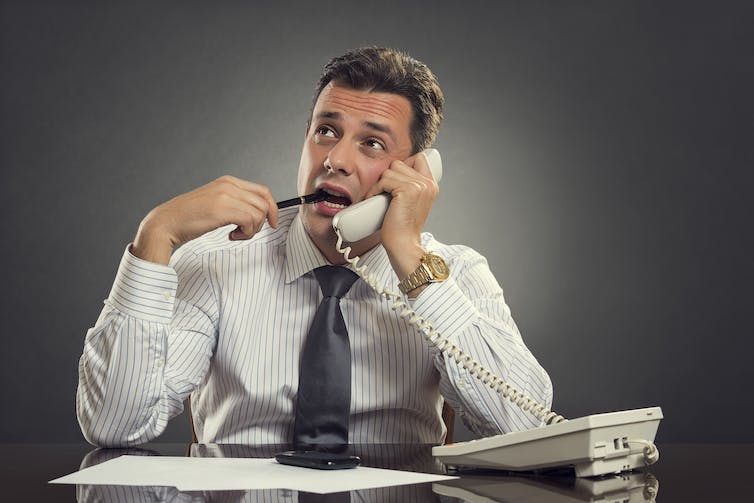 In one study, scientists induced social stress in a group of men by making them perform mental arithmetic out loud while standing in front of strangers. They found that people who reported being more anxious before the study showed more displacement behaviours during the maths test. However, the men who were picking and plucking at themselves during the test reported that they found the experience less stressful overall – meaning it reduced their stress levels in the moment. Displacement behaviours were not, however, associated with being a more anxious person in general – just during stressful experiences.

Fascinatingly, this effect has only been shown to hold for men, who show twice the amount of displacement behaviours as women.

But which theory is correct? Actually, they may all be connected. Fidgeting could be a form of general, unconscious self-regulation mechanism that varies depending on what is required – regulating attention, weight or stress. Indeed, it seems that being bored may actually cause us to become unconsciously . Physiological signs of stress are documented to rise significantly during periods of sustained attention (like when watching a lecture). So we may fidget to relieve that stress – rather than to reset our attention levels.

Fidgeting may (at least in part) be controlled by the brain’s hypothalamus, which is known to regulate many bodily processes. Indeed, when you inject orexins (a small protein) into part of the hypothalamus in rodents, you see an increase in spontaneous bodily activity. Orexins and the hypothalamus are both linked to arousal, appetite, wakefulness and other regulation processes.

But before you go out and bulk-buy fidget fad toys, or post this article on your mum’s Facebook page – with a “and you told me to stop fidgeting!” tagline – it is worth considering the social cost of the activity. Fidgeting is a strong indicator people use to evaluate others.

Fidgeters are assumed by onlookers to be bored, frustrated, hyper or not paying attention – which is not going to make you any friends. Fidgeting movements are also a distraction for others – movement is a highly salient visual cue that automatically pulls focus. So if you are going to shake those legs … maybe keep it under the table.