It’s been one of the most astonishing changes in human anatomy. In just one generation, people all over the world have got a lot bigger. Although we’re also gradually getting a bit taller, the really big change has been in body fat. And while much of this is put down to lifestyle, some suggest that “obesity genes” mean it is easy for some people to gain weight and more difficult for them to lose weight.

However, in a new study published in the BMJ, we show that possessing the risk version of the FTO gene (the gene which has the biggest effect on body fatness) does not affect a person’s ability to lose weight.

In the UK in 1980, about 7% of adults were obese, but that figure is now nearly four times higher. Although Britons are among the fattest people in Europe, they don’t hold the world record. More than half of the adults in the Polynesian archipelago of Tonga are obese and rates are almost as high in Kiribati, the Federated States of Micronesia and in some Gulf States.

It’s easy to blame changes in lifestyle for the dramatic expansion of human waistlines. Most of us now sit down while we work, and motorised transport, lifts and escalators ensure that we don’t have to use much energy to move around. Of course, attractive energy-laden foods and drinks are readily available everywhere at historically low prices. So it’s obvious, isn’t it? We eat too much and we do too little physical activity, so the surplus energy has to go somewhere.

Like all other animals, we’ve also evolved to be very efficient at hanging on to any surplus energy which we tuck away as fat in adipocytes – our specialised fat-storage cells. In evolutionary terms, being able to store energy for times of food shortage or famine was a big advantage.

So it would be easy to blame our environment for today’s alarming obesity rates. But if obesity-causing environments are all around us, why aren’t we all overweight? Are some of us genetically predisposed to gain weight in such circumstances? 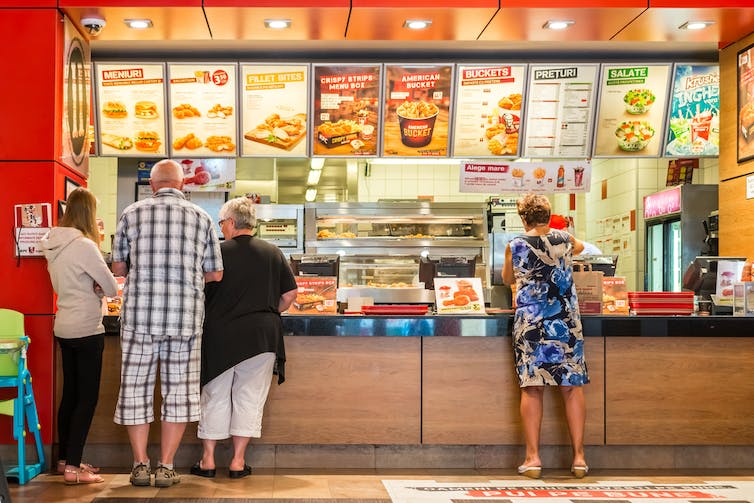 Recent studies, which compared the genomes of hundreds of thousands of lean and obese people, have identified more than 90 genes associated with body fatness. The gene with the biggest effect is called FTO. So maybe some of us can blame our FTO, and other gene variants inherited from our parents, for those extra pounds.

Being overweight or obese means that we live shorter lives and that we are much more likely to suffer from a wide range of health problems such as diabetes, bowel cancer and osteoarthritis. Governments are waking up to the economic and social costs of obesity including, rather belatedly, trying to halt and reverse rates of childhood obesity. So finding more effective ways of enabling people to lose weight is becoming a high priority.

Since people carrying the risk version of the FTO gene are heavier and 70% more likely to be obese, my colleagues and I wondered whether this would make it more difficult for those people to lose weight. To test this idea, we needed data from large numbers of people who had been tested for the FTO gene and who had taken part in high-quality, randomised, controlled, weight loss trials.

We searched the world’s literature and were delighted when the researchers responsible for the eight biggest trials agreed to join our team. With this international collaboration of European and North American scientists, we could pool the individual data for more than 9,500 people who had taken part in the trials, which used diet, physical activity or drugs to induce weight loss.

Having applied robust statistical techniques to this data, we were surprised to discover that having the FTO gene had no effect on weight loss. The weight loss interventions were just as effective in people with the risk version of this gene as in everyone else. And our finding appears to be universal – it applies to men and women, to younger and older people, and to Caucasians and Black Americans.

This is important news for people trying to lose weight since it means that diet, physical activity or drug-based weight loss plans will work just as well in those who carry the FTO gene. At the societal level, it emphasises the urgency in changing our obesity-causing environment towards one in which eating more healthily and being more active become the norm for everyone. Genetics may influence weight, but it doesn’t dictate what you can do about it.